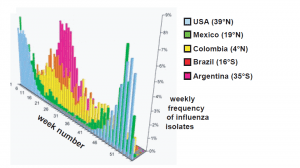 In temperate climates, influenza displays distinct seasonality: infections mainly occur from November through March in the northern hemisphere, and from May to September in the southern hemisphere. The results of experiments in guinea pigs have revealed that aerosol transmission of influenza virus is most efficient in cold and dry conditions, and completely blocked at warm or humid conditions. Therefore it has been suggested that seasonality of influenza in temperate climates is regulated by temperature and humidity. In the tropics, influenza activity is more sporadic, occurring throughout the year or in temporally irregular outbreaks. One hypothesis to explain this pattern is that transmission in these areas occurs by contact, not by aerosol.

To determine if influenza transmission by contact is influenced by humidity and temperature, infected and uninfected guinea pigs were housed in the same cage. The effect of environmental conditions of spread of virus to uninfected animals was then determined. The results show that temperature or relative humidity have little effect on the efficiency of transmission by contact. Based on the results obtained in guinea pigs, the authors suggest that transmission of influenza viruses in the tropics is mainly through direct or indirect contact.

But it’s not clear that influenza occurs in all tropical countries in a sporadic, year-round pattern. Effect measure has an excellent post on this topic called “Do the tropics have a flu season?” They point out that a two-year study in Nicaragua revealed that influenza shows a characteristic seasonality with a peak in the middle of the rainy season.

If low temperature and humidity favor transmission of influenza, why has the 2009 swine-origin H1N1 influenza virus continued to spread throughout the spring and summer months in in the northern hemisphere? Lowen and Palese offer four possible reasons:

The authors rule out explanation #1, mainly because seasonal H1N1 and H3N2 viruses which circulated in the winter of 2008-09 have not been detected frequently during the spring and summer of 2009. They believe that the remaining hypotheses are all possible, but prefer #4. I don’t know the basis for their preference, and they do not elaborate.

Our understanding of influenza seasonality has markedly improved in recent years, but is still incomplete. Information obtained from viral infection of animals may provide clues, but will rarely answer all the questions about human infectious diseases. You should not find this conclusion surprising: how could infecting a few dozen guinea pigs in plastic cages model what occurs in billion of human beings spread across an ecologically diverse globe?

Lowen, A., & Palese, P. (2009). Transmission of influenza virus in temperate zones is predominantly by aerosol, in the tropics by contact PLoS Currents Influenza