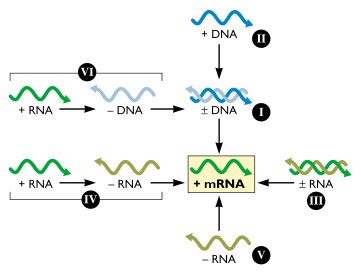 When originally conceived, the Baltimore scheme encompassed six classes of viral genome, as shown in the figure.Â  Subsequently the gapped DNA genome of hepadnaviruses (e.g. hepatitis B virus) was discovered. The genomes of these viruses comprise the seventh class.Â  During replication, the gapped DNA genome is filled in to produce perfect duplexes, because host RNA polymerase can only produce mRNA from a fully double-stranded template.