While most adults cannot name a scientist, the readers of virology blog can identify many of them.

I asked readers to spontaneously name just one scientist, and I received 204 responses. Nine of the individuals named were not scientists; that left 195 responses out of 204, indicating that 96% of those who responded could name a scientist. In stark contrast, 23% of adults in the USA Today poll could not name a single scientist. This result is not surprising – readers of science blogs probably have a higher understanding of the subject compared with the general population.

Who are the most frequently named scientists in my informal poll? Of the 195 individuals who correctly responded, 45 named more than one scientist. To simplify data analysis, I considered only the first scientist mentioned by these individuals, leaving 150 responses for scrutiny. Here are the top 10 scientists named in the poll: 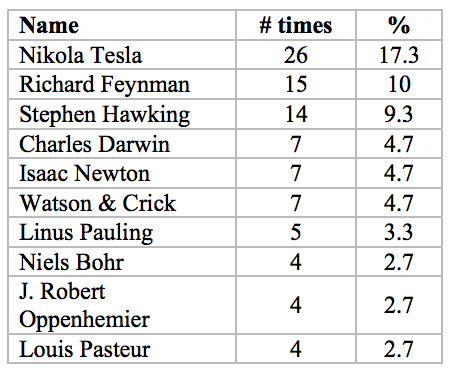 I was surprised at the amazing diversity of scientists selected. Four scientists were each named three times (Dawkins, Einstein, Galilei, Heisenberg), 12 were named twice (Dirac, Earle, Faraday, Franklin, Carver, Kaku, Leeuwenhoek, Nye, Plait, Planck, Turing, Tyson, Racaniello), and 56 scientists were named once. In all, 82 different scientists were identified by 150 respondents. Even more scientists were listed by the 45 other individuals who gave more than one name.

One reader asked if anyone could name female scientists. Unfortunately none made the top-ten list above, and only 9 of the 82 different scientists were women – Marie Curie, Rachel Carson, Sylvia Earle, Dian Fossey, Virginia E. Johnson, Ada Lovelace, Mary-Claire King, Barbara McClintock, and Doris Taylor. A dozen more female scientists were identified by those individuals who listed more than one person.

I draw a few conclusions from this very informal poll: first, the readers of virology blog are familiar with a very broad range of scientists; and second, awareness of the contributions of female scientists could be improved. But the real issue is the gulf between my readers and those who responded to the USA Today survey. How can we reach those individuals to teach them some science?