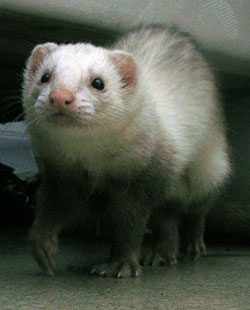 The results of experiments comparing the virulence in animals of the 2009 H1N1 influenza virus with seasonal strains have spawned the headline Study Suggests H1N1 Virus More Dangerous Than Suspected. In my view, the best experiment is now being done in humans: infection of millions with the pandemic virus. The results show that the virus is no more virulent than last season’s H1N1 strain.

In mice, ferrets, and non-human primates, the 2009 H1N1 swine-origin influenza virus (S-OIV) replicated more efficiently, and caused more severe lesions in the lungs than a seasonal H1N1 virus. These findings lead the lead author of the study to comment:

I’m puzzled by this statement. As far as I know, the 2009 H1N1 strain has so far likely infected millions of people, and most have concluded that the disease is no more severe than seasonal influenza. Are mice, ferrets, and non-human primates more reliable indicators of influenza virus virulence than humans?

I agree that the 2009 H1N1 influenza virus does seem to multiply more extensively in the respiratory tract than a seasonal H1N1 strain, as does the 1918 virus. But how many influenza virus strains have been studied in such animals? There are probably others that can replicate in the lower tract of experimental animals but are not very pathogenic in humans.

Two other research groups published the results of similar experiments in ferrets. They both found that the 2009 H1N1 virus replicated to higher titers, and more extensively in the lower respiratory tract, than seasonal H1N1 influenza virus. One of the groups concluded:

Our results indicated that the 2009 A(H1N1) influenza virus replicates efficiently in the upper and lower respiratory tract of ferrets, is associated with mild or moderate clinical signs and pathological changes and is transmitted efficiently between ferrets via aerosols or respiratory droplets. These results are in agreement with observations in humans, where generally mild disease but relatively efficient human-to human transmission has been observed

In other words, although the 2009 H1N1 replicated more efficiently, and in different parts of the lungs than seasonal H1N1 virus, these authors felt the observations were consistent with the low virulence of the virus humans.

It’s worth noting that when the authors of the Nature paper infected miniature pigs with the 2009 H1N1 influenza virus, the virus replicated without clinical symptoms. This result emphasizes the importance of remembering that animals are models for studying virus infections; they rarely duplicate the effects of a virus infection in humans. Furthermore, the virulence of a virus strain may vary dramatically depending on the dose and the route of infection, as well as on the species, age, gender, and susceptibility of the host. Virulence is a relative property. Consequently, when the degree of virulence of two very similar viruses are compared, the assays must be identical.

Do we really want to conclude that the new H1N1 strains is ‘more dangerous’ than we think based on tests in animal models which may or may not accurately reflect what occurs in humans? The ongoing infection of millions of humans with the new H1N1 virus seems a better source of data – and so far the results indicate that the new pandemic strain is no more dangerous than seasonal influenza.

Of course, it is possible that a more virulent version of the 2009 H1N1 virus could emerge in the coming months – what will happen as this virus evolves in humans is anyone’s guess – but who knows if it will retain the ability to multiply in the lower tract? The only thing that is certain is that it will be a different virus from the one that has been studied in mice, ferrets, and small pigs.