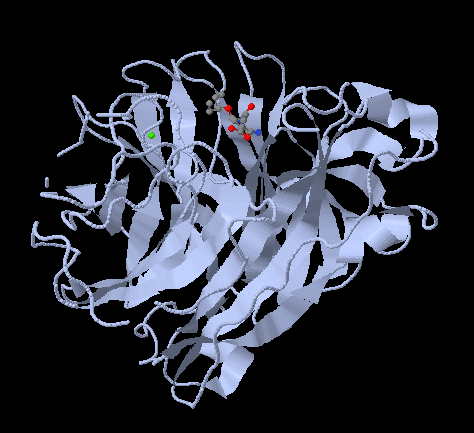 Tamiflu (Oseltamivir) is one of the few antiviral drugs available for treatment of influenza. Use of the drug has increased substantially because of the emergence of the 2009 H1N1 pandemic strain, against which no vaccine is yet available. A recent study has shown that low levels of oseltamivir can be detected in the aquatic environment. This finding raises the possibility that aquatic birds which harbor influenza virus could be exposed to the antiviral, leading to selection of drug resistant viruses.

Oseltamivir is an inhibitor of the influenza neuraminidase (NA) glycoprotein. This enzyme removesÂ sialic acids from the surface of the cell, so that newly formed virions can be released. Neuraminidase inhibitors such as Tamiflu and Relenza function by preventing cleavage of sialic acid from the cell surface. These inhibitors act by binding to the sialic-acid binding pocket of the NA protein.

Tamiflu is s prodrug, oseltamivir phosphate, which is converted to the active form, oseltamivir carboxylate (OC) in the liver. The active form of oseltamivir is excreted in the urine, and is not removed byÂ sewage treatment plants. It has therefore been suggested that OC may present in the aquatic environment, andÂ could expose natural reservoirs of influenza virus to low levels of the antiviral.

Because Japan is the largest consumer of Tamiflu, the levels of OC were determined in the Yodo River system in the Kyoto and Osaka prefectures. This river was selected because it is distant from the sea and located in a densely populated area. Surface water was collected before (June 2007) and during (December 2007 and February 2008)Â the flu season. No OC was detected in water samples from June 2007. At the onset of the flu season, December 2007, the antiviral was found at levels between 2 and 7 nanograms per liter (ng/L). At the peak of the flu season, in February, levels increased to 12 – 58 ng/L. Levels of OC were higher in water samples taken near sewage treatment plants, compared with those obtained farther away. The amounts detected are close to the concentration of drug that causes 50% inhibition of virus replication (the IC50) in cell cultures, reported to be between 80â€“230 ng/L.

The authors suggest that dabbling ducks, a natural reservoir of influenza virus, could ingest OC. As influenza in dabbling ducks is a gastrointestinal infection, the virus would encounter oseltamivir in the gut, which could promote selection of viruses resistant to the drug.

It is not known whether OC in aquatic environments leads to influenza virus resistance to Tamiflu. Clearly additional studies must be done to determine whether the antiviral drug can be found in other waters around the world. Influenza viruses should be isolated from aquatic birds living in OC contaminated environments to monitor resistance to Tamiflu.