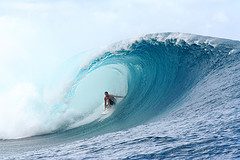 One notable characteristic of the four previous influenza pandemics is that they occurred in multiple waves. The 1918 pandemic began with outbreaks of low mortality in the spring and summer, followed by a more lethal wave in the winter. This pattern has fueled speculation that the current H1N1 pandemic strain will undergo mutation that leads to the emergence of a more lethal virus. What is the evidence that pandemic waves of increasing virulence are a consequence of viral mutation?

The only virus available from the 1918 pandemic was rescued from an Alaskan influenza victim who was buried in permafrost in November of that year, when higher mortality was already evident. This makes it impossible to correlate any genetic changes in the virus with increased virulence. Furthermore, as discussed on ProMedMail,

The November 1918 influenza virus certainly has genetic and phenotypic properties expected of a virulent virus. These include the ability to multiply in the absence of trypsin*, lethality in mice and embryonated chicken eggs, and efficient replication in human bronchial epithelial cells. But we don’t know if these properties were absent from the virus that circulated in the spring of 1918.

Do the pandemics of 1957 and 1968, which also occurred in waves of increasing lethality, provide any information? Viruses are available from different stages of these pandemics, but to my knowledge the virulence studies have not been done.

This uncertainty makes it impossible to conclude that the 2009 H1N1 pandemic strain will become more virulent. Nevertheless, speculation is rampant, and accompanied the recent release of the Brazilian isolate. Another example is an amino acid change in the viral PB2 protein observed in some 2009 H1N1 isolates. According to Recombinomics,

Acquisition of E627K is a concern because it allows for optimal replication at 33 C, the temperature of a human nose in the winter, in contrast to E627, which is in the avian version of PB2 and allows for optimal replication at 41 C, the body temperature of birds. The appearance of E627K raises concerns that the level of swine flu with E627K will markedly increase in colder months. In 1918, the flu in the spring was mild, but the fall version of the virus, which had E627K, was much more virulent and targeted young, previously healthy adults…

If the amino acid at 627 is an important determinant of virulence, we would expect to find E627 in viruses isolated early in the 1918 pandemic – but such viruses are not available. Therefore the role of this amino acid change in virulence in humans cannot be tested. Further complicating the situation is that other amino acids in the viral PB2 protein can influence viral replication at low temperatures.

Fortunately, new H1N1 isolates are obtained every week, which provide a very accurate sampling of the entire pandemic. Should the new H1N1 strain become more virulent, it will be a relatively straightforward task to determine the genetic changes that accompany this property. Finally we will be able to determine if  pandemic waves of increasing virulence are a consequence of specific changes in the viral RNA.

*We’ll discuss the requirement of proteases for influenza virus replication next week.