Host defense mechanisms are imperfect because the genomes of every known virus encodes proteins that can block nearly every step of the immune response. For every host defense, there is a viral offense. Let’s consider the different ways that viruses are known to evade the early, or innate, host defenses.

The illustration depicts in a simple way how the innate immune system detects and responds to viral infections. When a virus enters a cell (left), the infection is sensed and the cell responds by producing IFNs. These cytokines bind to specific receptors on the cell surface, causing the production of hundreds of proteins encoded by interferon-stimulated genes, or ISGs. These proteins have anti-viral activity, and can stop a viral infection.

The red lines indicate where viral interference takes place in the innate defense pathway. Viral infections antagonize the sensing of infection (as we discussed previously for influenza virus NS1 protein), production of IFN, and synthesis and activity of ISGs.

Viral gene products interfere at nearly every step of the innate immune pathway. We’ve previously discussed how theÂ cytoplasmic proteins RIG-I and MDA5 detect double-stranded or single-stranded RNA, leading to a series of reactions and the synthesis of cytokines such as IFN. As shown in the diagram below, each step of these pathways is carried out by proteins shown as colored boxes. The white boxes show where viral proteins are known to interfere with these pathways.

As you can see, many viruses encode proteins that interfere with this sensing pathway – influenza virus, HIV-1, vaccinia virus (VV), Ebolavirus, hepatitis C virus, hepatitis A virus (HAV), herpes simplex virus (HSV), and Kaposi’s sarcoma virus (KSHV) to name a few. The viral proteins interfere with recognition of viral RNA, the individual steps (mainly phosphorylation events) carried out by the multiple proteins, and synthesis of IFN mRNA in the cell nucleus.

What’s more amazing is that this is only one of the pathways by which viral infections are sensed by cells. Other detectors of viral infection include the toll-like receptors, which sense viral RNA, DNA or proteins. And yes, you guessed it – viruses have also evolved ways to antagonize those pathways. And we haven’t yet discussed the adaptive immune response to virus infection! 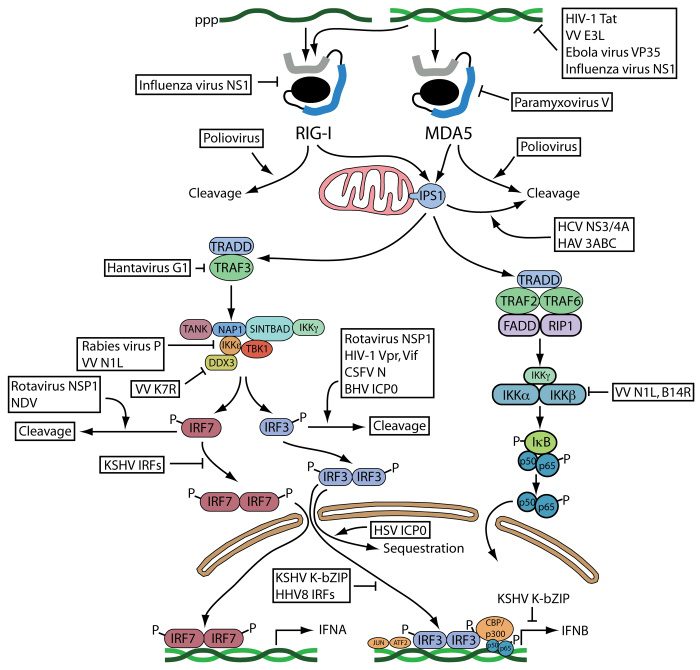