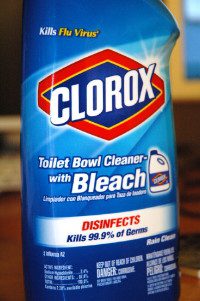 While perusing the cleaning items at the supermarket last night, I spotted the words ‘Kills Flu Virus’ on a bottle of toilet bowl cleaner. Do toilets play a role in transmission of influenza?

Influenza is an infection of the respiratory tract. The virus enters the tract in aerosols or by contact with saliva or other respiratory secretions from an infected individual. Common toilet use is not a risk factor for transmission of influenza, because there is no evidence that the virus replicates in the human intestine. Some avian H5N1 subtypes appear to be able to multiply outside the respiratory tract in humans, but such infections are rare.

It’s more likely that the ‘Kills Flu Virus’ label is a marketing ploy to sell more toilet cleaner. People are in general afraid of influenza, and may be reassured by the idea of eliminating the virus from all areas of their home. The product website indicates that the toilet bowl cleaner ‘kills’ common cold rhinoviruses. Considering that rhinoviruses do not replicate in the alimentary tract, this activity also appears to be superfluous.

If you look closely at the lower left hand part of the bottle, just above the ingredient list (click image for a larger view) you will see the words “Influenza A2”. This is not correct influenza virus nomenclature so I don’t know exactly what Clorox has in mind. However, I would not be surprised if this were replaced with ‘swine flu’ in the near future.

I have no doubt that Clorox Toilet Bowl Cleaner will inactivate influenza virus (viruses cannot be killed, as they are not living). The active ingredient is sodium hypochlorite, commonly known as bleach, a widely used disinfectant. In my laboratory, we keep beakers of 5% sodium hypochlorite in our cell culture hoods for inactivating viruses.

There are certainly other microbes that should be removed from our toilets. Examination of the back of the bottle indicates that the product will inactivate rotavirus, a major cause of gastroenteritis. This makes perfect sense, as rotavirus is present in feces. It is well known that toilet flushing produces aerosols that can spread infectious diseases. In the paper cited below, the authors deliberately contaminated a toilet with enteric bacteria (Serratia marcescens) and a virus (bacteriophage MS2). Serratia and MS2 were detected in the air after the first flush. Subsequent flushing also released microorganisms into the air, although the numbers declined after each flush. The authors conclude:

Many individuals may be unaware of the risk of air-borne dissemination of microbes when flushing the toilet and the consequent surface contamination that may spread infection within the household, via direct surface-to-hand-to mouth contact. Some enteric viruses could persist in the air after toilet flushing and infection may be acquired after inhalation and swallowing.

There is evidence that plumbing was responsible for spread of SARS coronavirus during the 2003 epidemic. In contrast to influenza virus, it is clear that the SARS coronavirus can replicate in the human gastrointestinal tract, and that fecal shedding is a significant mechanism of transmission.

It’s good practice to use bleach-containing cleansers to sanitize toilets, but it is not likely to have an impact on transmission of influenza. Unless you routinely sneeze into the toilet.