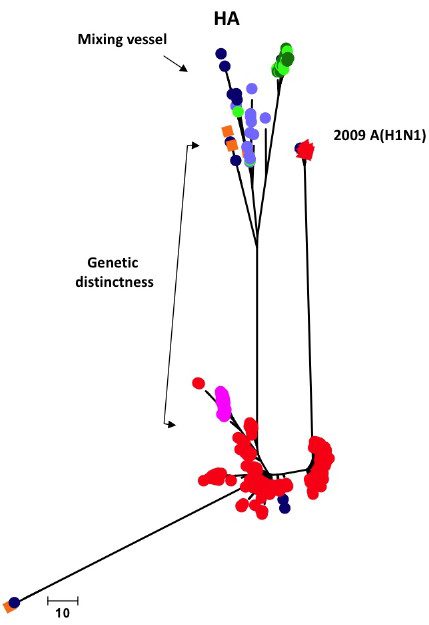 Many virologists, including myself, believe that the threat of avian H5N1 influenza is not only overestimated, but also distracts from serious consideration of other potential pandemic strains. In early 2005 I wrote about this problem (“Should we worry about avian influenza?) and suggested that we should pay attention to H2N2 strains as a potential pandemic threat. Although I was wrong in my choice of the next pandemic strain, the lesson is that we should keep a broad perspective when attempting to predict which virus will cause the next global epidemic.Â  The authors of an article in Eurosurveillance chide us for ignoring the swine flu threat:

Although the role of swine as “mixing vessels” for influenza A(H1N1) viruses was established more than a decade ago, it appears that the policy makers and scientific community have underestimated it. In fact, in 1998 influenza experts proposed the establishment of surveillance in swine populations as a major part of an integrated early warning system to detect pandemic threats for humans but, to some extent, this task was overlooked.

In support of their contention, the authors compare the number of swine influenza A sequences (4,648) with those of human (46,911) and avian (41,142) influenza A viruses. They also point out that some countries, such as the United States, have devoted all of their pandemic preparedness budget ($3.8 billion for the US) towards the prevention and control of avian A(H5N1) influenza. They believe that

…in this plan, a substantial effort was dedicated to prevent and contain the foreign threat of Asian avian flu, neglecting the influenza threat that the North American swine population presents. Specifically, we believe that the aforementioned strategy ignores the swine farm and industry workers which constitute the population at higher risk of contracting and spreading the hypothetical pandemic influenza virus.

This strategy is based on the authors’ conclusions that the new influenza H1N1 viruses are genetically distinct from other H1N1 viruses that have been circulating in humans for the past 20 years. The new swine derived viruses are more similar to viruses that were transmitted from pigs to humans in Iowa, Maryland, and Wisconsin between 1991 and 2006. This conclusion is illustrated by the phylogenetic tree of HA protein sequences from H1N1 influenza viruses. Included in the analysis are H1 HA proteins from the 2009 influenza A(H1N1) virus (red triangles), earlier human (red and pink circles), swine (navy blue and purple circles), and avian (green circles) viruses. The viruses involved in pig-human interspecies transmission in Iowa, Maryland and Wisconsin, shown as orange squares, cluster with the swine viruses and the 2009 H1N1 virus.

An extensive surveillance of the genetic evolution of influenza A viruses that circulate in Mexican poultry farms has been carried out since 2002. A similar system will now be put into place on swine farms. The goal is to identify genetically distinct influenza viruses that could lead to pandemics.