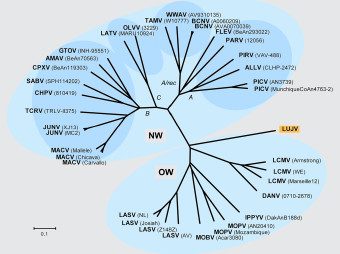 A new member of the arenavirus family, Lujo virus, has been identified in patients who died during an outbreak of hemorrhagic fever in late 2008. Sequence analysis reveals that Lujo is a new arenavirus, genetically distinct from other members of the family which includes Lassa virus.

A patient with unexplained hemorrhagic fever was identified in Zambia in September 2008. After transfer to Sandton for further care, four health care workers involved with the case also became ill. The first four patients died, and the fifth survived after treatment with ribavirin.

Sequence analysis of total liver and serum RNA from the patients revealed the presence of a new member of the arenavirus family. The virus has been provisionally named Lujo based on its origin in Lusaka, Zambia, and Johannesburg, South Africa. Phylogenetic trees were prepared from the viral genome sequences (example at left). These trees show that Lujo virus branches off the root of the Old World arenaviruses. This analysis suggests that Lujo virus is a member of a novel genetic lineage, and is distinct from previously characterized viruses in this family.

It’s not clear how the index case was infected by Lujo virus. Most arenavirus infections are acquired by contact with infected rodent excreta, by inhalation of dust or aerosolized virus-containing particles, or ingestion of contaminated foods. At least one arenavirus might be transmitted from bats, and this possibility should not be ruled out for Lujo virus. The index patient likely transmitted the infection to the four health care workers via aerosols or infected body fluids.

There are several noteworthy aspects of this emerging story. First, it is clear that pyrosequencing can be used to rapidly identify new pathogens. In this case, sequences were obtained within 72 hours of receipt of clinical specimens. Lujo virus appears to be highly lethal in humans, based on the deaths of 4 out of 5 of the infected patients. However the number of infections identified so far is small, and the lethality ratio might fall as additional infections are studied. Now that the sequence of Lujo virus is known, reagents can be produced which will enable rapid identification of new cases by more conventional diagnostic approaches such as polymerase chain reaction. Lujo is a new member of the arenavirus family and is genetically distinct from both Old and New World arenaviruses. Why it has just appeared in humans is not known, but possible reasons include the more frequent contact between humans and wild animal species, and better and more aggressive detection methods. It is likely that a virus closely related to Lujo is present in either rodents or bats but has not been previously detected. As we have said many times before, the zoonotic pool is very deep.

I am struck by similarities between the events surrounding the discovery of Lujo virua and Lassa virus in 1969. In both outbreaks, Columbia University Medical center was involved, and a nurse who was infected by the index patient survived as a consequence of antiviral therapy.