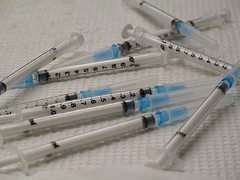 Health and Human Services (HHS) Secretary Kathleen Sebelius announced on Friday that she is allocating $1 billion in existing funds to purchase large quantities of vaccine against the novel H1N1 influenza strain, and to conduct clinical trials this summerÂ  to determine if an adjuvant can be used. If this money is being taken away from research projects, then it’s a very bad idea.

Part of the reason why we were caught by surpsise by the new H1N1 influenza virus is that scientific research in the US was underfunded during the previous administration. As a consequence, many influenza research projects were never carried out that would have helped us to characterize, for example, what types of influenza viruses are circulating in pigs. While I applaud Sebelius’ goal of keeping Americans safe, there is no need to cannibalize research dollars to do so.

It’s certainly a good idea for the government to purchase vaccine in the event that the new H1N1 influenza virus returns to the US in the fall. However, it is not clear to me that the US government should be conducting a clinical trial on an adjuvant. Recently Glaxo announced that it would begin preparation of an influenza vaccine containing a proprietary adjuvant. This adjuvant has not been approved by the FDA for use in the US; presumably the clinical trials announced by Sebelius would test the safety of this vaccine component. It’s not clear to me why an adjuvant needs to be tested, since the current influenza vaccine functions very well without one. I understand that use of the adjuvant will allow each vaccine dose to contain smaller quantities of virus – but it seems to me that another approach would be to boost vaccine production.

Adjuvants are compounds added to vaccines that stimulate the immune response. They work in at least three different ways: they present antigens as particles; they localize antigen to the site of inoculation; and they directly stimulate the intrinsic and innate immune responses. The best known is complete Freund’s adjuvant, a mixture of killed mycobacteria and mineral oil. It is extremely potent but not licensed for use in humans because it causes tissue damage. Three of the active components are muramyl dipeptide, lipid A, and mycobacterial DNA, potent activators of the innate and inflammatory response.

Certain adjuvants, including alum (microparticulate aluminum hydroxide gel) are licensed for use in some human vaccines, such as those against hepatitis A and B viruses. Many others are under development, including Glaxo’s adjuvant, which is proprietary and therefore not revealed. These experimental adjuvants boost the immune response in a variety of ingenious ways. They are promising, but much work remains to be done to demonstrate their safety and effiicacy. That research, including the evaluation of safety and efficacy by clinical trial, is typically done by the manufacturers who will profit from their sale.

I have three messages for HHS. First, why cannibalize research dollars to pay for production of vaccine and testing of an adjuvant? Basic scientific research is just as important for keeping us healthy. Second, if companies will profit from an adjuvant because they will sell more doses of vaccine containing less virus, then they should pay for the clinical trial. Finally, be very careful when deciding whether or not to include an adjuvant in this fall’s vaccine against the new influenza H1N1 strain. We don’t need adverse effects to fuel the anti-vaccine movement.