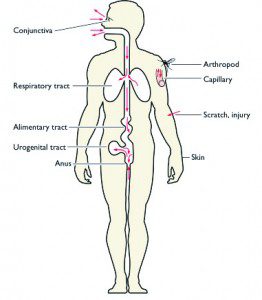 In a recent press conference (transcript pdf), Dr. Keiji Fukuda of WHO made the following statement about infection with the new influenza H1N1 strains:

But human influenza is a respiratory disease – how can it cause gastrointestinal symptoms?

According to the textbook Clinical Virology (ASM Press), in infants and children,

About 40% of symptomatic patients have fever, cough, and rhinitis, up to 40% have emesis or diarrhea, and 25% or more have otitis media or lower respiratory tract disease.

Influenza is a respiratory illness. Symptoms of flu include fever, headache, extreme tiredness, dry cough, sore throat, runny or stuffy nose, and muscle aches. Children can have additional gastrointestinal symptoms, such as nausea, vomiting, and diarrhea, but these symptoms are uncommon in adults. Although the term “stomach flu” is sometimes used to describe vomiting, nausea, or diarrhea, these illnesses are caused by certain other viruses, bacteria, or possibly parasites, and are rarely related to influenza.

Why would influenza virus infection cause gastrointestinal symptoms? In humans, there is no evidence that the virus replicates in the intestine. Some avian H5N1 subtypes appear to be able to multiply outside the respiratory tract in humans, but such infections are rare. In wild birds, influenza viruses replicate extensively in the intestine and are shed in feces. The reasons for the difference in the location of virus replication in humans and birds are not understood.

I can think of at least two reasons why influenza might be accompanied by gastrointestinal symptoms: concurrent microbial infections, or cytokines such as tumor necrosis factor-alpha that are induced by influenza virus replication in the respiratory tract. Neither involves multiplication of influenza virus in the alimentary tract.