Let’s resume our discussion of the influenza virus genome. Last time we established that there are eight negative-stranded RNAs within the influenza virion, each coding for one or two proteins. Now we’ll consider how proteins are made from these RNAs.

Figure 1 shows influenza RNA segment 2, which encodes two proteins: PB1 and PB1-F2. The (-) strand viral RNA is copied to form a (+) strand mRNA, which in turn is used as a template for protein synthesis. Figure 2 (below) shows the nucleotide sequence of the first 180 bases of this mRNA.

The top line, mostly in small letters, is the nucleotide sequence of the viral mRNA. During translation this sequence is read in triplets, each of which specifies an amino acid (the one-letter code for amino acids is used here). Translation usually begins with an ATG which specifies the amino acid methionine; the next triplet, gat, specifies aspartic acid, and so on. Only the first 60 amino acids of the PB1 protein are shown; the protein contains a total of 758 amino acids.

Most of the influenza viral RNAs code for only one protein. However, RNA 2 (and two other RNAs) code for two proteins. In the case of RNA 2, the second protein is made by translation of what is known as an overlapping reading frame.

On the second line of the RNA sequence in figure 2 is an atg highlighted in red. You can see that this atg is not in the reading frame of the PB1 protein. However, it is the start codon for the second protein encoded in RNA 2, the PB1-F2 protein (F2 stands for frame 2, because the protein is translated from the second open reading frame). Figure 3 shows how PB1-F2 is translated. The sequence of the viral RNA is shown from the beginning, except that reading frame 1, which begins at the first ATG, is not translated. Rather, we have begun translation with the internal atg, which is in the second reading frame. This open reading frame encodes the PB1-F2 protein which, in this case, is 90 amino acids in length (its length varies in different isolates). The protein is much shorter than PB1 because translation stops at a termination codon (tga) long before the end of the RNA. Because PB1-F2 is encoded in reading frame 2, its amino acid sequence is completely different from that of PB1. 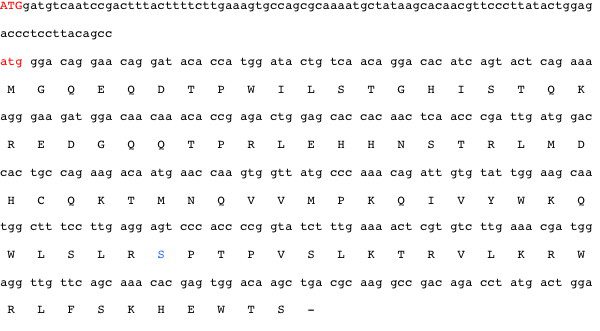 The sequences used for this example are from the 1918 H1N1 strain of influenza. Notice the amino acid of PB1-F2 which is highlighted in blue. This amino acid has an important role in the biological function of the protein, which we will consider in a future post.

My apologies if the figures and text are not optimally aligned. A blog post is not the optimal format for such information, but in the interest of time I have not explored other options. Suggestions for improvement are welcome.

Send your questions to virology@virology.ws.