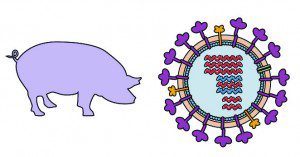 Here is an update on the global swine flu situation as of 29 April 2009.

There are now 257 laboratory confirmed cases, with 7 deaths, in 11 countries. In the US there are 109 casesÂ  in 11 states. There are many more suspected cases; together the statistics indicate widespread dissemination of the new H1N1 influenza virus. I no longer doubt that this is the next pandemic strain. WHO will probably soon raise the level of influenza pandemic alert from phase 5 to phase 6. Important questions include whether spread will continue in the northern hemisphere through the summer, or stop very soon, as is the case with most influenza virus outbreaks. Unfortunately the southern hemisphere seems in for an extended flu season. Will antivirals be useful in reducing morbidity and mortality? Will the virus returns to the north in a more virulent form in the fall? Can a vaccine be prepared in time?

Viral RNA sequences from 12 new isolates were deposited at NCBI, bringing the total to 32. Conspicuously missing are sequences from Mexican isolates. In a Science Magazine interview, Ruben Donis, Chief of the molecular virology and vaccines branch at CDC, indicated that strains from Mexico and elsewhere are “very, very similar. Many genes are identical. In the eight or nine viruses weâ€™ve sequenced, there is nothing different.” It’s still not clear why these sequences have not been released; clearly the work has been done. In any case, his statement confirms what we have suspected from examining other isolates, that the Mexican strains are not sufficiently different to explain their apparent higher pathogenicity.

I highly recommend reading the interview with Dr. Donis, as it contains a wealth of information about the new H1N1 virus. Much of it will be difficult to understand for those without familiarity with influenza virus, but you can send your questions to virology blog. One interesting aspect concerns the statement last week that the new virus was composed of genes from pig, human, and avian sources. Examination of the sequences in the past week has revealed the virus to be composed of RNAs solely from swine viruses. Here is what Dr. Donis said:

Q: Is it of swine origin?

R.D.: Definitely. Itâ€™s almost equidistant to swine viruses from the United States and Eurasia. And itâ€™s a lonely branch there. It doesnâ€™t have any close relatives.

Q: So where are avian and human sequences?

R.D.: We have to step back [to] 10 years ago. In 1998, actually, Chris Olsen is one of the first that saw it, and we saw the same in a virusÂ from Nebraska and Richard Webby and Robert Webster in Memphis saw it, too. There were unprecedented outbreaks of influenza in the swine population. It was an H3.

The PB1 gene, that was human. H3 and N2 also were human. The PA and PB2, the two polymerase genes, were of avian flu. The rest were typical North American swine viruses. Those strains were the so-called triple reassortants.

I’ll post an entry this weekend on the history of swine viruses, which should help clarify Dr. Donis’ explanation.

On Friday, 1 May I will be holding a FAQ session on swine flu with Marc Pelletier of Futures in Biotech. A video stream of our conversation will be broadcast live at 4:00 PM EST at live.twit.tv. Send us your questions via twitter to @profvrr.