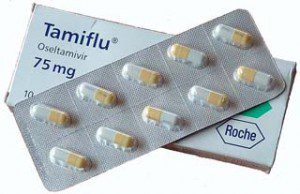 The isolates of influenza virus obtained in the current global outbreak have proven to be resistant to the adamantane antivirals, but susceptible to oseltamivir (Tamiflu) and zanamivir (Relenza). Consequently the two neuraminidase inhibitors will likely be used extensively to control the outbreak until a vaccine is available. Extended use of the antiviral drugs will undoubtedly lead to the selection of drug resistant influenza virus mutants. However, there might be a silver lining to this otherwise dismal prediction.

These observations indicate that mutations that cause resistance to oseltamivir reduce aerosol, but not contact transmission of influenza virus. The authors speculate that the amino acid changes associated with drug resistance also decrease the enzymatic activity of the viral NA (neuraminidase) protein. One of the functions of this viral protein is to facilitate release of newly synthesized virus particles from the surface of the infected cell. Mutations that cause drug resistance may lead to impaired virus release, and therefore poor transmission by the aerosol route.

Although these results are encouraging, it is not clear if drug resistance mutations would have a similar effect on aerosol transmission of the current A/Mexico/2009 (H1N1) influenza viruses. A high proportion of the influenza H1N1 viruses from the previous season were resistant to the drug, yet the viruses spread extensively. One possible explanation for the discrepancy is that influenza in guinea pigs does not lead to coughing or sneezing. Hence, the virus-laden aerosols produced by guinea pigs are a consequence of normal breathing. In humans, air turbulence caused by coughing and sneezing might be sufficient to dislodge virus particles that in the guinea pig would remain firmly attached to the epithelial surface. Nevertheless, the results suggest that simple hygienic measures could slow the spread of a drug resistant virus that transmits by efficiently by contact and poorly by aerosol.