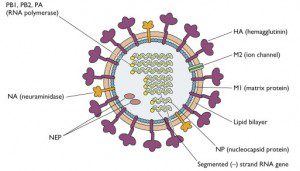 Here is an update on the global swine flu situation as of 28 April 2009.

Swine influenza virus isolates from the US and Mexico have been given names according to the proper nomenclature, which takes the following form:
Influenza type/Country/isolate number/year (subtype).

Accordingly, the following swine influenza virus strains have been isolated:

I expect to see many more isolates from different countries in the coming weeks.

Today the CDC released genome sequences of the viral RNAs of six swine flu isolates from California and Texas (Addendum: sequences of New York, Ohio, and Kansas isolates were added late yesterday). The influenza virus genome consists of eight segments of RNA, each coding for one or more proteins (illustrated). Each RNA segment has a name – PB2, PB1, PA, HA, NP, NA, MP, and NS. Mystery Rays has done a quick analysis of the sequences. The isolates are all the same strain, but they are not identical. Unfortunately we don’t yet have genome sequence from any Mexican isolate – otherwise we could determine if they are significantly different. Such information might provide clues about why the disease in Mexico seems to be more severe than elsewhere.

A comparison with RNA sequences of other influenza virus isolates shows that most of the viral RNAs are from swine influenza viruses, with the possible exception of the PB1 RNA, which may be derived from a human H1N1 virus. This observation is somewhat surprising, because last week we were told that the new swine virus had RNA segments from pig, human, and avian influenza viruses. According to ProMED-mail, the NA and MP genes are related to those of influenza viruses from Asian-European swine, and the other genes appear to originate from swine flu viruses from pigs in North America. The data are in accord with the original assertion of the CDC that all genes of the new isolate were derived from swine viruses.

The fact that A/California/04/2009 and related isolates are pig viruses, with little or no genetic material from human influenza virus strains, is fascinating. Clearly these strains are different from viruses that circulate in pigs because they can be transmitted among humans and cause respiratory disease. It will be very important to compare the sequences of these isolates with viruses obtained from pigs in an attempt to determine what changes enabled the virus to adapt to humans.