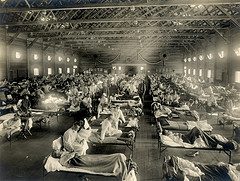 I have received several questions about my assertion that the northern hemisphere is safe, at least until the fall, from an epidemic of A/California/09/2009 influenza virus. Here are two representative questions:

If I recall correctly, Spanish flu hit hardest during the summer and fall.

As for the swine flu, is it impossible (and why?) to see the current contagion spreading in the northern hemisphere over the following months?

Let’s see if we learn anything from the timing of two past pandemics. The 1918-19 pandemic began in the spring of 1918 with an outbreak of mild respiratory disease in soldiers at Fort Funston, Kansas. The infection spread to other military bases in the US and eventually to Europe. These infections were mild and did not receive much attention from the press. At the end of August 1918 a more virulent H1N1 virus emerged which caused high mortality (2.5% in the US, compared to 0.1% for typical influenza). The disease peaked in September and November. In the spring of 1919 a second disastrous wave of infections took place.

The H3N2 strain of influenza virus was responsible for a pandemic in 1968-1970. This virus originated in Southern Asia in the summer of 1968 and was responsible for sporadic cases of disease from September through December in the US, England, and Japan. Epidemic spread in these and other northern hemisphere countries began in December and ceased at the end of April 1969. In Australia epidemic spread of the H3N2 virus began in January 1969, ended in October, and recommenced in June 1970.

This history demonstrates the seasonality of pandemic influenza, and suggesta that spread of A/California/09/2009 in the northern hemisphere is not imminent. Based on this regularity, the epidemic in Mexico should be over no later than the end of May. While it is not ‘impossible to see the current contagion spreading in the northern hemisphere over the following months’, it would be unprecedented.