Could Rift Valley fever come to the US? 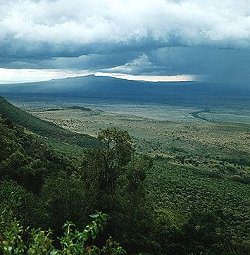 In an NYTimes Op-Ed article called “The Scary Caterpillar”, Jeffrey Lockwood wrote about potential use of a virus as a weapon of bioterrorism:

What if a terrorist group announced that their operatives had introduced Rift Valley fever into the United States? This mosquito-borne disease would make West Nile virus look like a case of the sniffles. Given that virtually every corner of America has a native species of mosquito capable of transmitting the virus, Rift Valley fever could spread across the nation. Hundreds of thousands of people could be sickened, with thousands dying and many more falling blind. The livestock industry could lose billions of dollars as animals aborted their fetuses and succumbed to bloody diarrhea. Imagine the fear if every mosquito bite this summer could be the precursor of a disease that would cause your brain to become inflamed or your internal organs to hemorrhage?

To me it reads like a movie script, not a serious assessment. Let’s dissect the statement and find out the truth.

Rift Valley fever virus (RVFV) is a member of the Bunyaviridae, a large family of enveloped, RNA containing viruses that includes the well known hantaviruses. The virus was first isolated in 1930 from a lamb during investigation of a disease that was causing abortion and mortality in Kenyan sheep. Since then the virus has caused large outbreaks of disease in livestock. Because infection may lead to high rates of abortion and death, the virus has substantial economic impact. The virus is transmitted among livestock by mosquito vectors. Epizootics often occur when precipitation is high, favoring mosquito breeding.

Outbreaks were confined to livestock in Africa until September 2000 when the disease was observed in Saudi Arabia and Yemen. These epidemics were believed to be a consequence of more abundant mosquito populations that resulted from heavy rain and flooding near the Asir mountains. There is some concern that the virus might spread to Europe, but that has not been observed.

RVFV may also infect humans; in the vast majority of such cases, transmission occurs by direct contact with the blood or organs of infected animals. Some infections are transmitted by mosquitoes, but this is certainly not the main route of human infection.

How serious is human disease caused by RVFV? Most cases are mild, and involve non-specific symptoms including fever, muscle and joint pain, and headache; neck stiffness and vomiting may also occur. About 1% of infected patients may develop more serious disease including eye infection, meningoencephalitis, and hemorrhagic fever. Fatality is typically less than 1%, although in the outbreak in Yemen and Saudi Arabia it was 12%.

What mosquitoes are known to carry RVFV? The principal vector appears to be mosquitoes of the Aedes genus, although Culex species have been shown to transmit the virus in the laboratory. However, the particular species known to transmit RVFV in Africa are not the predominant type of mosquito in the US.

It is clear that nearly every statement in the paragraph reproduced above from “The Scary Caterpillar” is an exaggeration. Rift Valley disease usually does not make West Nile encephalitis look like a case of the sniffles; every corner of America does not have a mosquito capable of transmitting the virus, and the disease severity is overstated. Whether or not the virus could be entrenched in the US is not known  – we might not have the proper climate for the levels of mosquito infestation that is required for transmission. Like all viruses, RVFV is capable of changing so that it could cause extensive human disease in the US – but our current understanding of the viral disease is completely inconsistent with Lockwood’s description.

There are other bothersome errors in the passage. The writer calls Rift Valley Fever a ‘mosquito borne disease’, but readers of virology blog know that it is the virus that is borne by the mosquito, not the disease. And the terrorists would not be introducing the disease into the US – they would introduce the virus. Finally, the sentence “This mosquito-borne disease would make West Nile virus look like a case of the sniffles” just isn’t right – you can’t compare a disease with a virus. But these are small errors when compared with the outright exaggerations of the article.

Perhaps the fact that the author of the Times piece, Jeffrey A. Lockwood, is not a virologist, but a professor of natural sciences and humanities at the University of Wyoming, explains why he does not understand the biology of Rift Valley fever virus.

Previous post: A retrovirus is invading the Koala genome