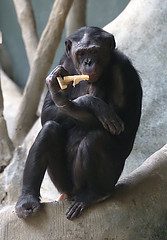 The many human viral diseases that have crossed from other animal species Â – such as AIDS, Ebola, SARS, encephalitis and respiratory diesease caused by henipaviruses – demonstrate the pathogenic potential of the zoonotic pool. Are there also reverse zoonoses – diseases of humans that are transferred to other animal species?

An example of a reverse zoonosis occurred just last week at Lincoln Park Zoo in Chicago, where a 9 year old chimpanzee died of respiratory disease caused by human metapneumovirus. This member of the paramyxovirus family is responsible for approximately 10% of all respiratory tract infections. All seven members of a group of chimpanzees were infected with the virus, but only one became ill. The virus was likely transmitted to the chimps by humans, but precisely how and when is not known. Outbreaks of fatal respiratory disease in wild chimpanzees have been reported previously, and human metapneumovirus has been one of several human viruses isolated from these primates. Such infections are expected to occur more frequently in zoological parks, and ando also in game preserves as human encroachment of these facilities increases.

Influenza virus may also be frequently transmitted from humans to other animal species. An outbreak of influenza recently lead to the death of 6 bonobos (a species of chimpanzee) in a Congo wildlife sanctuary. Although the influenza subtype responsible for the outbreak has not been identified, it has been suggested that the source was one or more visitors during the February epidemic of influenza in Kinshasha.

Human influenza viruses are frequently isolated from pigs. Since its emergence in 1968, the H3N2 subtype has infected pigs many times throughout the world, and has often caused serious outbreaks. More recently the influenza H1N1 subtype has been shown to infect pigs. Influenza viruses remain in the pig population for long periods of time, and may serve as reservoirs for the recycling of older influenza virus strains back into the human population.

Just as increasing human population, travel, and the global food business increase the likelhood that viruses will jump from animals into humans, the same factors ensure the reverse spread as well – often with dire consequences for zoological parks and wild and domestic animals. And the viruses we pass on may come back to haunt us another day.