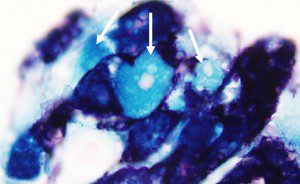 Many of us have experienced herpesvirus reactivation from latency. Suddenly a sore erupts on the lip, festers for a week, then subsides. Years later, for no apparent reason, it happens again. Did you ever wonder what causes these recurrent blisters?

Herpes simplex viruses are associated with latent infections, a type of persistent viral infection that lasts for the life of the host. Infection with herpes simplex virus begins with intimate contact with an individual who is shedding the virus. Virions enter the oral or genital mucosal tissue and replicate, perhaps producing one or more lesions. While the infection runs it course and the lesion disappears,Â  the virus makes its way into sensory nerve endings and finds a permanent home in neurons. There the viral DNA remains silent until an insult – stress, ultraviolet light, hormonal changes – triggers viral replication. New virions are made, which travel to the epithelial surface, resulting in a lesion. Shed virus may be transmitted to others. The lesion heals and viral replication ceases until the next insult.

There have been many hypotheses to explain how the viral genome emerges from latency. One includes a central role for a viral gene called ICP0, which is known to encode a transcriptional activator – a protein that turns on the production of viral messenger RNAs, the templates for proteins. Another idea was that viral DNA replication begins first, which then leads to increased viral proteinÂ synthesisÂ and initiation of the lytic cycle. Both hypotheses have been disproven by experimental data.

New findings indicate that another viral protein, VP16, is crucial for emerging from latency. This protein is a component of the virion and is a very strong transcriptional activator. However, it is produced late in the viral replication cycle. How could a late viral protein be crucial for the initiation of the lytic cycle? Because of this conundrum a role for VP16 in reactivation was discounted some years ago.

Herpes simplex virus latency is usually studied in mice. The animals are infected with virus, which replicates and then establishes latency in neurons. Bundles of neurons called ganglia are then removed and cultured for several weeks, and infectious virus is assayed as a measure of reactivation. In these experiments, VP16 is produced at the end of the replication cycle. But what if the temporal regulation of VP16 is very different in the intact mouse? To answer this question, a herpes simplex virus was constructed carrying the promoter sequence for VP16 fused to a reporter gene, beta-galactosidase. Â Mice were infected with this virus, and ganglia recovered and examined for expression of the reporter protein. The results showed that the VP16 promoter was active in cells in the absence of any other viral protein. This finding was not consistent withÂ the previous conclusion that VP16 is a late gene.

The authors then studied reactivation in mice using mutants of VP16 that cannot activate viral mRNA synthesis. These viruses were unable to exit the latent stage in mice. However, when ganglia were cultured, the VP16 mutant virus entered the lytic cycle, confirming previous observations.

These findings underscore the crucial role of VP16 in exiting latency and entering the lytic cycle. Although VP16 is produced late during infection of cultured cells, in neurons within a mouse it is an early trigger of reactivation. How stress leads to the production of VP16 is not known but will certainly be the focus of future experiments.

For years investigators did not understand how herpes simplex virus enters the lytic cycle because they were studying the wrong model. The practice of infecting mice, removing ganglia and placing them in culture does not faithfully mimic reactivation in the animal. The key, as shown by these investigators, was to stress the animals and then remove the ganglia and assay reactivation.

This seminal finding will undoubtedly stimulate research to better understand the workings of a virus that infects over half of the world’s population.