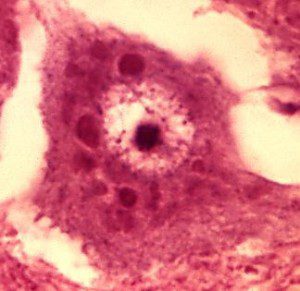 Viral replication frequently leads to the accumulation of intracellular masses of virions or unassembled viral components in the cytoplasm or nucleus of the cell. These inclusion bodies often bear the name of the individual who discovered them – such as Guarnieri bodies in the cytoplasm of poxvirus infected cells, intranuclear Cowdry bodies in herpesvirus infected cells, and Negri bodies in cells infected with rabies virus. Before molecular diagnostic techniques were developed, inclusion bodies were important for identifying the agent of a viral disease – but do they have an important role in viral replication?

Toll-like receptor 3 (TLR3) is one of many cellular proteins that can ‘sense’ when a cell is infected by a virus. The protein recognizes RNA that is produced during viral infection, and then signals the cell to produce interferons (IFN).Â  IFNs in turn induce the synthesis of many other cell proteins which have antiviral activities. TLRs and IFN are components of the innate immune system, the earliest defense against microbial invaders.

Normally a membrane protein, in cells infected with rabies virus TLR3 is relocated to Negri bodies, which also contain viral proteins and viral RNA. When levels of TLR3 are reduced in rabies-virus infected cells by RNA silencing, Negri bodies do not form, and viral yields are reduced. Therefore TLR3 is required for the formation of Negri bodies. Furthermore, mice lacking TLR3 are less susceptible to rabies virus infection. This result is somewhat counterintuitive, considering the role of TLR3 in detecting RNA virus infections and turning on the IFN system. However, it makes sense because rabies virus replication is reduced in the absence of TLR3.

Negri bodies were first described in 1903 by Adelchi Negri, an Italian pathologist and microbiologist. He would be amazed to learn the important role played by these eponymous bodies in rabies virus replication.