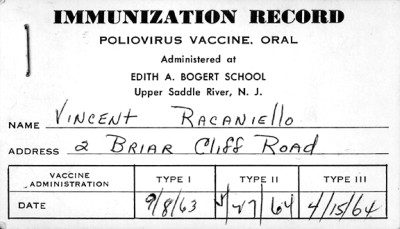 Last week on TWiV #26 Rich Condit and I were reminiscing about the possibility that we had received the virus SV40 along with our polio immunizations. That discussion prompted me to examine my immunization record for poliovaccine that my Mother had given to me in the early 1990s. She was cleaning out her house and decided that I should have it – a little memento for someone who has studied poliovirus for most of his career. Can we learn anything of value from this old immunization record?

The first lesson comes from the earliest date on the card, September 1963. I was ten years old – why was I receiving poliovaccine at that advanced age? A child born today in the US is given poliovaccine at 2, 4, and 6-18 months, and then at 4-6 years of age. I was immunized in 1955-56 with the first batches of inactivated poliovirus vaccine, IPV, created by Jonas Salk. Although IPV was used in mass immunization campaigns in the US and reduced the incidence of polio from a peak of 21,000 cases in 1952 to 2,500 in 1960, many felt that it did not confer lifelong immunity and would not lead to eradication of the disease. Hilary Koprowski, Herald Cox, and Albert Sabin all believed that an infectious poliovirus vaccine, which mimicked a natural infection, was needed. Sabin’s oral poliovirus vaccine (OPV) was licensed in the US in 1961, and once again American children stood in line for mass immunizations. OPV is taken by mouth, and I remember clearly waiting in the school auditorium in front of rows of tables covered with small paper cups. Inside each one was a pink sugar cube – the color a consequence of the vaccine which had been poured on it. I ate the sugar cube three times – September 1963, and then April and May of 1964.

If I had been immunized with IPV in the 1950s, wouldn’t the immunological memory block infection with OPV? No, because immunization with IPV did not confer protection of the alimentary tract, which is the initial site of replication of the OPV strains.

There are three columns on the card labeled type I, type II, and type III, which refer to the serotypes of poliovirus that had been poured on the sugar cubes. These monovalent poliovirus vaccines were stopgap measures, used only until approval came in 1964 for a single vaccine containing all three viral serotypes – trivalent OPV. The use of monovalent type 1 OPV resumed a few years ago in Egypt, because of the rarity of polio caused by the other serotypes.

Notice the order in which I received the three monovalent vaccines – type I first, followed by type III, and then type II. This sequence was initially used to prevent the type II virus from interfering with the subsequent replication of the type III strain. Later in 1964, the Advisory Committee on OPV recommended that the order of administration be changed to type II, I, and III. It was believed that giving type II vaccine first would diminish the risk of paralysis associated with types I and III.

Finally, note where the vaccine was administered – Edith A. Bogert School. Why didn’t I receive it in a doctor’s office? Because in mass immunization campaigns, vaccine is most efficiently given in locations where millions of children can be inoculated in a short time. We no longer use this approach – in developed countries new vaccines are incorporated into routine immunization schedules and dispensed in doctors’ offices. Mass immunization campaigns are deployed when it is necessary to quickly stop the chain of transmission. They are still used countries where polio is endemic, such as India, Pakistan, and Afghanistan.

That’s quite a bit to learn from a very small piece of paper. Maybe that’s why my Mother saved it for me.