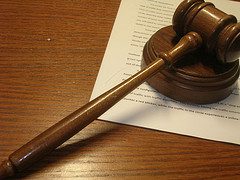 Fetal bovine serum is obtained in slaughterhouses where cows are prepared for the meat industry – some of the cows are pregnant, and the fetuses fall to the ground during the grisly procedure. The floor of the slaughterhouse is contaminated with fecal material, which contains bacteria and their viruses. Hence, when serum is collected from the fetuses, it is contaminated with bacteriophages, which are not removed when the serum is sterilized by filtration.

When bacteriophages were discovered in live viral vaccines in the 1970s, a controversy ensued – could they harm humans? Ultimately there was no evidence that bacteriophages caused any ill effects in humans. The regulations for producing human virus vaccines were therefore modified to allow for the presence of ‘unavoidable bacteriophages‘.

I discovered this interesting fact because, for the past few weeks, I have been preparing to testify as an expert witness in a product litigation trial dealing with poliovirus vaccine. I have been reading extensively about poliomyelitis and poliovirus vaccines, which also explains why this virus dominated virology blog this week. I took the stand yesterday, but can’t provide any details yet about this experience, because the case has not yet gone to jury. When it is finished I’ll write about this interesting intersection of science and law.

I greatly enjoyed NB’s conjecture about why I was focused on polio this week: the March of Dimes was formerly the charity organization known as the National Foundation for Infantile Paralysis, founded during the presidency of Franklin D. Roosevelt to defeat polio. And it happens to be the third month of the year.