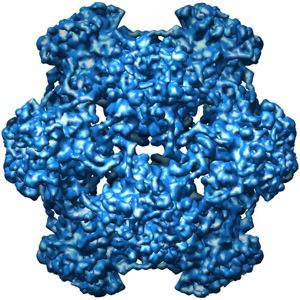 When Harald zur Hausen identified the first human papillomavirus (HPV-16)Â in 1983 in women with cervical cancer, little did he know he would receive the Nobel Prize in Medicine for this discovery 25 years later. He probably also did not know how difficult it would be to propagate these viruses in a way that would allow studies of all aspects of viral replication. A new method now allows the production of large quantities of virions which should permit new studies of the viral life cycle.

When the HPV dsDNA genome is introduced into primary human keratinocytes (PHKs), a small amount of DNA replication occurs but no infectious virus is produced. To circumvent this limitation, organotypic cell cultures called rafts were developed which enabled studies on viral replication. Raft cultures are prepared by plating PHKs on a collagen matrix containing fibroblasts; when placed at a liquid-air interface, the PHKs differentiate into a squamous epithelium. HPV replication can be studied in such cells after transfection of viral DNA, but the yields of virus particles are very low, and they cannot infect fresh cells.

In the new system, a plasmid carrying the HPV-18 DNA genome flanked by lox P sites is transfected into PHKs with a second plasmid that produces the Cre recombinase. This endonuclease cleaves the lox P sites, releasing the HPV genome from the plasmid, and viral DNA replication ensues. The cells produce high titers of progeny virus which can be used to infect fresh PHK cultures. The authors used this system to determine that viral DNA replication cannot take place while the cell is duplicating its own genome. Viral infection leads to a cessation of host DNA replication, at which time the cellular machinery is hijacked for the copying of viral genomes.

You might be wondering how theÂ twoÂ HPV vaccines on the market, GardasilÂ (quadrivalent, types 6, 11, 16, 18) andÂ Cervarix (bivalent, types 16 and 18)Â are produced, since their development pre-dates the high efficiency system described here. These vaccines consist of virus-like particles (VLPs), which are empty capsids that lack viral nucleic acids. The vaccines are produced by expressing in cells the viral capsid protein L1, which spontaneously assembles to form VLPs.