Anti-HIV ribozyme: an alternative to HAART? 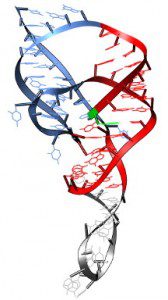 The treatment of AIDS patients with a combination of three or four antiviral drugs is known as HAART, or highly active antiretroviral therapy. Combination therapy has been effective for long-term control of infection, and represents one of the high points in AIDS research. The downside of HAART is that strict adherence to daily therapy must be maintained, and toxicity and viral resistance are continuing problems. Is there an alternative for AIDS patients?

The results of a phase 2 gene therapy trial suggest that gene therapy with an anti-HIV ribozyme could control HIV-1 replication in AIDS patients. A ribozyme is an enzyme made of RNA, not protein. Examples include the group I intron of Tetrahymena thermophila (the first ribozyme discovered), RNAse P of bacteria, group II self-splicing introns, and the hepatitis delta ribozyme. They differ widely in size, sequence, and mechanism of catalysis. They can cleave their own phosphodiester bonds, or those of other RNAs – which is why they are being explored as antiviral and antitumor agents.

The ribozyme used in the phase 2 study, which targets two overlapping open reading frames of HIV-1, was previously shown to inhibit viral replication in cultured cells. The ribozyme was incorporated into a retrovirus vector, which was then used to infect peripheral blood CD34+ stem cells that had been obtained from each patient. The stem cells were placed in culture, infected with the ribozyme-containing retrovirus, and then the cells were injected intravenously back into each patient. A total of 38 patients received cells that had been infected with the ribozyme-containing retrovirus, while 36 patients received cells that had been infected with a control retrovirus. Six months later, HAART therapy was halted for 4 weeks, to allow increased reproduction of HIV-1. The idea was that the virus would kill lymphocytes that lack the ribozyme, and that ribozyme-expressing immune cells would expand in number.

The treatment regimen was well-tolerated by all patients, and no adverse side effects were observed. The levels of HIV-1 in the blood of patients who received the ribozmye-expressing cells were consistently lower than patients in the control group. Lymphocytes of the CD4+ class – the kind infected by HIV-1 – were also more numerous in the blood of ribozyme-treated patients. These observations demonstrate that a single-dose gene therapy approach has great potential for treating AIDS.

Curiously, no viral mutants emerged in the patients that were resistant to the ribozyme. Nor had such mutations been previously observed in cell culture studies. Why such resistance mutations have not been described is a mystery – a single base change in the region of HIV-1 targeted by the ribozyme should be sufficient to prevent cleavage and inactivation of the viral genome. Because this region of the HIV-1 genome is highly conserved, mutations might produce less fit viruses which cannot compete with ribozyme-sensitive viruses.