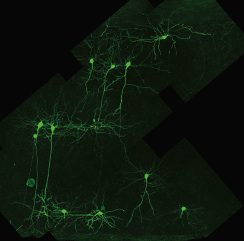 The Nobel Prize in Chemistry for 2008 was awarded to Osamu Shimomura, Martin Chalfie, and Roger Y. Tsien for the discovery and development of the green fluorescent protein, GFP. Dr. Chalfie’s contribution was to show that GFP could be used as a genetic tag by producing the protein in the transparent roundworm Caenorhabditis elegans. Who was the first to insert the gene for GFP into a viral genome?

The GFP gene was first inserted into the genome of potato virus X, a plant pathogen. One to two days after inoculation of the recombinant virus onto plants, regions of the leaves fluoresced bright green when illuminated with UV light. Animal viruses followed several years later, with insertion of the GFP gene into the genome of adenovirus. Infection with the recombinant virus lead to green fluorescence in cultured mammalian cells and in living brain slices, suggesting the possibility of using this technology to trace neuronal connections. This potential was subsequently realized when recombinant viruses that produce GFP were used to trace neuronal connections in the nervous system of living animals. Proteins like GFP that emit light of different wavelengths have been discovered in different organisms, allowing the tracking of multiple proteins in virus infected cells.

More recently, fluorescent proteins have been used to visualize single virus particles in living cells. In an early validation of the technique, the gene encoding the herpes simplex virus type 1 VP26 protein, which is located on the outer surface of the capsid, was fused with the coding sequence for GFP. The fusion protein was incorporated into intranuclear capsids and mature virions, which produced green fluorescence in infected cells. By using such viruses, entry, uncoating, replication, assembly, and exit of single virus particles can be studied in real time in living cells. For example, the movement of HIV-1 particles labeled with GFP (by fusion with the viral protein Vpr) was beautifully visualized in cells that had been injected with rhodamine-tubulin to label microtubules.

Of course, virus particles are too small to have color. I once told this to a second-grade class as I was showing them the X-ray structures of eight different picornaviruses, each of which I had colored differently. One young man raised his hand and said “Do you make them different colors just to know which is which?” Who said you can’t teach virology in elementary school!