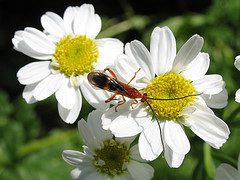 Endoparasitic wasps inject their eggs into moth or butterfly larvae, which are cannibalized as the eggs mature and develop into adult wasps. The wasp larvae survive in the caterpillars because the eggs are injected together with virus particles called polydnaviruses. These viruses replicate in cells of the caterpillar, and their genomes express proteins that modify host defenses and physiology. Polydnaviruses are unusual because their genomes encode no structural proteins. A new study reveals that the wasp genome provides viral structural proteins that are probably used to package the polydnavirus genome.

The genome packaged within polydnavirus capsids consists of multiple circles of dsDNA (30 for the Cotesia congregata bracovirus for a total of 560 kb). The viral DNA is integrated into the wasp genome and is therefore transmitted vertically. However, virions are produced only in the wasp ovaries. When the polydnavirus is injected into the caterpillar, no genome replication occurs, although viral mRNAs and proteins are produced. These proteins are essential for successful maturation of the wasp in the larval host.

To identify the polydnavirus capsid proteins, the authors sought related genes expressed in wasp pupal ovaries at times of maximal viral particle production. By sequencing DNA copies of wasp mRNAs, they identified 22 genes related to those of nudiviruses, ancient viruses similar to baculoviruses. The genes encode subunits of DNA-dependent RNA polymerase and structural proteins. Curiously, no genes encoding DNA polymerase were identified, suggesting that polydnavirus DNA is copied by wasp enzymes. The implication is that the enzymes for polydnavirus mRNA and capsid synthesis are produced in the wasp ovary from nudivirus genes.

There are other examples of defective viruses that do not encode capsid proteins. The RNA genome of hepatitis delta virus is encapsidated within hepatitis B virus particles, which is provided in co-infected cells. Similar satellites of plants depend upon co-infection with a helper virus to provide capsid proteins. The wasp polydnaviruses are unique because the capsid proteins are not provided by another virus, but by the wasp host. In turn, the wasp needs the virus to survive – closing the circle on a highly unusual symbiotic relationship.