Marburg virus travels to the US 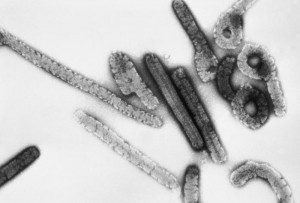 The first US case of Marburg hemorrhagic fever was reported last month in Colorado. Will there be more?

The patient had traveled to Uganda in December 2007 and visited a python cave, which houses thousands of bats – some of which might be reservoirs for Marburg virus. Two weeks after visiting the cave, she became ill and returned to the US, where she was treated in hospital and released. After hearing in July that another tourist who had visited the same python cave had died of Marburg fever, she returned to the hospital. Samples taken during the January hospital visit were then examined, and last month – one year after her illness – proved positive for Marburg virus.

The patient has recovered, which is fortunate, because Marburg virus is highly lethal – of 447 cases reported to the CDC, over 80% – 367 were fatal. None of the hospital workers who had contact with the patient became infected. Her traveling companion to Uganda, who cared for her during her illness, is currently being examined for infection.

The first outbreaks of Marburg hemorrhagic fever took place in laboratories in Marburg, Frankfurt, and Belgrade in 1967. The virus was believed to originate from African green monkeys that were being used for laboratory research. Marburg virus, the founding member of the Filoviridae, is an enveloped virus with a negative-strand RNA genome. Other members of the filovirus family are the five species of Ebola virus. Filoviruses are indigenous to Africa, but the animal reservoir for the virus has not been definitively identified.

Although the python cave in Uganda is closed, there are many other places in Africa where humans can encounter bats, a suspected reservoir of filoviruses. With rapid global travel easily attainable, a tourist may become infected overseas and transport the virus home even before symptoms emerge. It seems likely that similar incidents will become increasingly frequent, warranting the development of rapid diagnostic assays and effective antiviral compounds. One possible lead is tetherin, which we previously discussed for its ability to restrict release of Ebola virus. Two other groups have also found that tetherin limits filovirus replication. The mechanism of inhibition could be used to design new antiviral approaches.

Further work is also required to understand the ecology of filoviruses and their mechanism of transmission. This information will not come easily – these viruses are extremely dangerous and must be studied under the highest level of biological containment – BSL4.