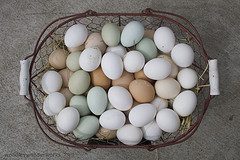 Influenza virus undergoes continuous antigenic variation, necessitating production of a new vaccine each year. This is not a trivial task. Six to nine months before the flu season begins, the viral strains for inclusion in the vaccine must be selected. High-yielding recombinant strains are produced and grown in embryonated chicken eggs. This year, approximately 140 million doses of the killed, injected vaccine were produced in the US – from 140 million eggs. The annual formulation of influenza vaccine is a huge burden on both medical care providers and vaccine producers, not to mention the many chickens that must toil to produce millions and millions of eggs. Can we envision an influenza vaccine that provides lifelong protection, like the vaccines against polio and measles?

The protective antibodies induced by the current influenza vaccines are directed against the highly variable viral glycoproteins, HA and NA. Other virion proteins are far more conserved, and have been tested in experimental vaccines. For example, the nucleoprotein (NP), an internal component of the virion, is an attractive immunogen because it induces a cytotoxic T cell response that should provide protection against a broad spectrum of strains. Because the NP protein is not particularly immunogenic, DNA vaccines have been extensively tested. These are effective at inducing cellular immune responses and have met with some success, especially when coupled with adenovirus vectored antigens.

The viral M2 protein has been a focus of recent influenza vaccine efforts. This highly conserved transmembrane protein forms an ion channel in the virion, and is essential for uncoating of the viral genome in endosomes. Immunization with M2 protein has been shown to confer protection in mouse and ferret models of influenza. However, the protein is not sufficiently immunogenic. In the reports cited below, the authors examined the immunogenicity of M2 protein conjugated to carrier proteins, or presented on the surface of hepatitis B virus-like particles. The latter was effective at inducing protective immunity in mice, but not in rhesus monkeys. The authors conclude that data obtained in mice should not be used to select M2 vaccine candidates.

It seems likely that future influenza vaccines will be based on NP and M2 proteins, perhaps in combination. Significantly more work will be required before such vaccines are approved for use in humans – in the meantime, our insatiable thirst for chicken eggs will continue.