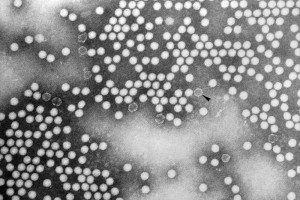 The WHO strategy to eradicate poliomyelitis depends upon immunization of every child under 5 years of age, and nationwide AFP (acute flaccid paralysis) surveillance to identify cases of poliomyelitis. A laboratory network then determines whether AFP is caused by poliovirus. Recently a new member of the picornavirus family was identified in children with non-poliovirus AFP. This virus has been named cosavirus (common stool-associatedÂ  picornavirus).

In one study, a combination of mass sequencing, RT-PCR,Â  and RACE was used to obtain the viral sequence from a stool sample from an Australian child with acute diarrhea. In the second study, stool samples from South Asian children with AFP were partially purified to obtain particle-protected RNA, which was then amplified by randomized oligonucleotides. In both cases a novel picornavirus was identified which is most closely related to cardioviruses and Senecaviruses. However, the viral genome sequences are sufficiently diverged to warrant placing them in a new genus, Cosavirus.

Perhaps the most interesting aspect of this work is the observation that in Pakistan and Afghanistan, cosavirus sequences were detected in over 40% of stool samples from healthy children as well as from children with AFP. In contrast, only 1 of 1000 stool samples from Edinburgh, UK was positive for the virus.

An important question which must be resolved is whether cosavirus can cause AFP. It is possible that many cosavirus infections are asymptomatic, as is the case with poliovirus infection, where only 1 infection in 100 leads to paralysis. Does replication of cosavirus in the intestine interfere with the poliovirus vaccine strains, possibly explaining immunization failures in India? It will also be interesting to study the replication of this virus in cell cultures and in laboratory animals. The viral genome has some unusual features, including two 2A proteins, one of which is not related to any other picornavirus 2A, and a long 5′-noncoding region. Such studies are so far hindered by the fact that no laboratory has yet reported propagation of cosavirus in cultured cells.