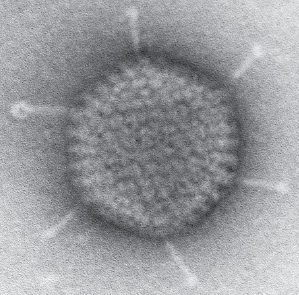 The past week brought an animated discussion triggered by an article in Obesity which reported the adipogenic effect of adenovirus type 36 infection in cultured cells. The press had a field day with headlines like ‘Can a common cold virus really make you fat’?. Reactions on Twitter and blogs ranged from disbelief to outrage to ‘what will they think of next?’ Is there anything to this story? Let’s take a measured virological look at the evidence.

Increased weight gain as a consequence of virus infection is not a new phenomenon. To date eight different viruses have been shown to cause weight gain in animals or humans. These ‘obesogenic’ animal viruses include canine distemper virus (in mice), Rous-associated virus type 7 (chickens), borna disease virus (rats), and avian adenovirus (chickens).

The paper which triggered the discussion this week concerns adenovirus type 36, which was first isolated in 1978 from a young girl with enteric illness. Adenovirus virions are made of a double-stranded DNA genome encapsidated in a non-enveloped, icosahedral protein shell. There are 52 human adenovirus serotypes which cause respiratory infections (common cold), enteric disease, and eye infections (conjunctivitis). Ad36 has been shown to caused increased body weight in laboratory chickens, mice, rats, rhesus monkeys, and marmosets. Three other adenovirus serotypes have been examined in the context of body weight; Ad37 infection caused weight gain in chickens, while types 2 and 31 did not.

Antibodies to Ad36 have been measured in humans to determine whether infection is associated with weight gain. In one study conducted in 3 US cities, antibodies to Ad36 were found in 30% of obese individuals and 11% of lean individuals. No difference in body mass index or serum lipids was observed when antibodies to Ad2, Ad31, or Ad37 were measured.

Ad36 induces cultured murine preadipocytes to differentiate intoÂ mature adipocytes. It has been suggested that the viralÂ E4orf1 gene product correlates with the adipogenic effect. In the paper published in Obesity this week, the authors show that in cell culture, Ad36 but not Ad2 increases theÂ expression of early, intermediate, and late genes of the adipogenic cascade. When an antiviral agent was used to decrease Ad36 mRNA levels, differentiation of the cells into adipocytes was also decreased. Lacking, however, are the results of experiments in which E4orf1 mRNA expression was silenced by siRNA.

Based on the information in the research literature, it is not unreasonable to postulate that Ad36 plays a role in adipogenesis. Whether the virus is a factor in human obesity remains to be determined. There are many unanswered questions. Is the weight in crease observed in animals infected with Ad36 reversible? Where does the virus replicate during the period of weight gain? When virus is cleared, does weight return to pre-infection levels? If not, why not? Before proceeding any further with human studies, it will be necessary to definitively identify the adenovirus gene product(s) that induces adipogenesis. The mechanism by which the viral protein produces this effect should be discerned. The viral gene identified should then be used to induce weight gain in animals. Should these experiments provide a mechanism for Ad36 induced adipogenesis, then more extensive epidemiological studies in humans are warranted.

Conclusion: It is incorrect to conclude that infection with a common cold virus will cause weight gain. However, the effects of Ad36 observed to date are curious and deserve further investigation in different laboratories.