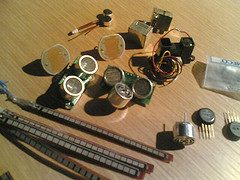 The innate immune system responds within minutes of infection to produce type I interferons and pro-inflammatory cytokines. Interferons induce the synthesis of cell proteins with antiviral activity, and also shape the adaptive immune response by priming T cells. Despite the discovery of interferons over 50 years ago, only recently have we begun to understand how cells sense the presence of a virus infection.

Two families of pattern recognition receptors have been shown to distinguish unique molecules present in pathogens, such as bacterial and fungal cell wall components, viral RNA and DNA, and lipoproteins. The first family includes the membrane-bound toll-like receptors (TLRs).Â A second family of pattern recognition receptors has recently been identified, which comprises the cytoplasmic sensors of viral nucleic acids, including MDA-5, RIG-I, and LGP2.Â Studies of the signaling pathways that lead from pattern recognition to cytokine induction have revealed extensive and overlapping cascades that involve protein-protein interactions and phosphorylation, and culminate in activation of transcription proteins that control the transcription of genes encoding interferons and other cytokines.

A relatively uncharted area of innate immunity is the recognition of viral DNA. There have been several reports of cytoplasmic DNA sensors, but precisely how these recognize nucleic acid and induce cytokine synthesis remains to be determined. When double-stranded DNA is introduced into the cell cytoplasm, production of type I interferons and chemokines occurs independently of Toll-like receptors and the cytoplasmic RNA sensor RIG-I. dsDNA activates transcription factor IRF3 and theÂ interferon-betaÂ promoter through a signaling pathway involving the kinases TBK1 and IKKi. Transcription factor NF-kappaB is also activated after introduction of dsDNA, independent of TBK and IKKi, but dependent upon IPS-1, an adaptor molecule that links RIG-I with downstream signaling events.

Another putative DNA sensor isÂ DLM-1 , or DAI (DNA-dependent activator of IFN-regulatory factors). Synthesis of DAI in cells enhances DNA-mediated induction of type I IFN, while silencing of mRNA for DAI inhibits this response. DAI also binds to dsDNA and enhances its association with IRF3 and TBK1.

Recently a new DNA sensor,Â AIM2 (absent in melanoma 2),Â was identified by a proteomics screen for proteins that bind DNA and are induced by interferon-beta. The protein was found to localize to the cell cytoplasm and binds dsDNA, consistent with a role in sensing DNA. Â AIM2 was found to be part of the inflammasome, a multiprotein complex involved in inducing synthesis of pro-inflammatory cytokines. Levels of AIM2 roseÂ significantlyÂ in cells treated with dsDNA, and siRNA mediated silencing of its mRNA interfered with secretion of the cytokine IL-1beta.

These results certainly indicate that AIM2 is a candidate sensor of DNA. It will be of interest to determine the role of this protein in the innate response to infection with viruses that produce dsDNA.