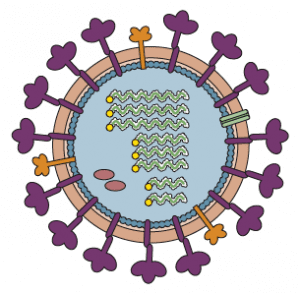 In many viral infections, clinical symptoms such as fever, tissue damage, pain, and nausea are a consequence of the immune response. Damage caused by the immune system Â is known as immunopathology. For some viruses that do not directly kill cells (non-cytolytic viruses) the immune response is the main cause of disease. Immunopathology may be caused by antibodies, an excessive innate response, or lymphocytes. Consequently, it has been proposed that the symptoms of a virus infection could be ameliorated by inhibiting the immune response. A paper in the 21 January online issue of PNAS demonstrates that immune modulation with a sphingosine analog significantly dampens the cytokine response in mice infected with influenza virus, thereby reducing tissue injury.

The authors used intranasal infection of mice with the WSN strain of influenza virus that had been modified to produce CD8 and CD4 T cell receptor epitopes from another virus, lymphocytic choriomeningitis virus. The inclusion of these sequences allowed the authors to measure virus-specific T cells in the infected animals. The effect of the sphinogosine analog AAL-R was then determined. This compound was selected because it had been shown previously to reduce virus-specific T cellÂ accumulationÂ in the lung. When administered in the respiratory tract, AAL-R reduced the anti-influenza virus T cell response and the release of cytokines and chemokines. Infiltration of macrophages and polymorphonuclear leukocytes into the lung was inhibited, and lung injury decreased. However, the drug did not increase the replication of virus in the lungs, and anti-viral antibody levels were unaffected. These effects were observed even when AAL-R was given 4 days after virus infection. Finally, the authors show that the drug acts by reducing the levels of major histocompatibility class I and II molecules, and the co-stimulatory B7-2 molecule, from dendritic cells in the lung and draining lymph nodes. The result is a reduction in the number of virus-specific T cells in the lung.

The studies reported here provide a better understanding of influenza virus induced injury of the lung. It may also be possible to use sphingosine analogs to decrease lung injury in human influenza infections, a possibility that the authors are exploring. Such compounds might be especially effective when used together with antiviral drugs such as Tamiflu and Relenza. This combination therapy approach would have the dual benefit of reducing viral loads and suppressing lung damage.