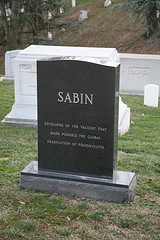 The oral poliovirus vaccine (OPV), which has been used to eradicate poliomyelitis in much of the world, was developed by Dr. Albert Sabin during the 1940s and 1950s. This live virus vaccine was produced by passing the three poliovirus serotypes in various cell cultures and searching for variants with reduced neurovirulence. In the days before molecular biology, it was a laborious, empirical procedure that lead to the vaccine that has prevented polio in hundreds of millions of children.

Early in my scientific career I had the opportunity to interact with Dr. Sabin. In 1981, as a postdoctoral fellow in Dr. David Baltimore’s laboratory at MIT, I had developed an infectious DNA copy of the poliovirus genome, an achievement which was noted by Dr. Sabin in a letter that he sent to Dr. Olen Kew of the Centers for Disease Control. At a 1983 meeting in Washington, DC on the control of poliomyelitis, I gathered up my courage and approached Dr. Sabin between sessions. I told him I was interested in studying poliovirus neurovirulence in mice. He was very kind but expressed skepticism about the value of this approach.

In the ensuing years I sent Dr. Sabin copies of reprints of our work on this aspect of poliovirus pathogenesis. He always responded with insightful, and often highly critical comments. On several occasions I have shown these letters during seminars that I have presented on our work. They have never failed to elicit roars of laughter from the audience. Last week I shared these letters during my talk at the 19th Challenge in Virology in Saanen, Switzerland. One member of the audience suggested it would be valuable to put these letters on the internet, so that others could experience Dr. Sabin’s intensity.

Below are copies of correspondence from Dr. Sabin. Included is the 1982 letter from Dr. Sabin to Olen Kew, and two letters, from 1986 and 1991 in response to copies of our publications that I had sent Dr. Sabin. I also include a copy of a 1956 paper of Dr. Sabin’s on which he wrote notes to me in an effort to make sure I understood specific aspects of poliovirus pathogenesis. These documents show the level of enthusiasm and dedication that Dr. Sabin had for research on poliovirus.

After his death in 1993, Dr. Sabin was buried in Arlington National Cemetery. The inscription on his tomb reads “Developer of the vaccine that made possible the global eradication of poliomyelitis”.