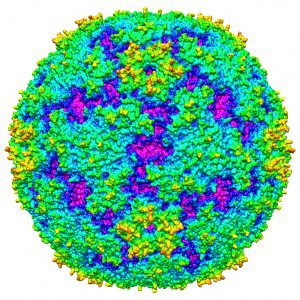 There is an ongoing outbreak of enterovirus 71 (EV71) in a broad region of Asia, including China, Vietnam, Mongolia, Taiwan, and Singapore. There have been 3606 cases in China, including 36 deaths.

Infection with EV71 is common in Asia, where it causes hand-foot-and-mouth disease in children, a febrile syndrome accompanied by flat or raised red spots in the tongue, gums, inside of cheeks, palms, soles of feet, and buttocks. Neurological complications of EV71 infection include aseptic meningitis, encephalitis, and poliomyelitis-like polyneuritis. The high fatality rate of the current outbreak is unusual, but not unprecedented. A study of the Taiwan epidemic of 1998 revealed an unusual neurologic manifestation, brainstem encephalitis, which was also observed in Malaysia in 1997 but not in earlier epidemics. The changes in EV71 disease might be a consequence of the emergence of a more virulent viral strain.

EV 71 is a member of the family Picornaviridae, which also contains the well-known pathogen poliovirus. The virus was first isolated in 1969 from a case of fatal human encephalitis in California. EV71 is distributed worldwide and is spread by fecal-oral and possibly by respiratory droplet transmission.

In some locations EV71 is emerging as the most significant neurotropic enterovirus. It has been suggested that the incidence of EV71 might increase after the eradication of poliovirus, in which case there will be increased efforts to develop vaccines and antivirals against this agent.