A Vaccine for Every Cold 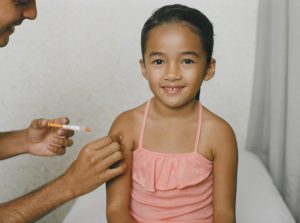 It is cold outside. My throat is scratchy, I can’t stop sneezing, and I have a runny nose. These are the typical symptoms of a human rhinovirus (HRV) infection, better known as the common cold. The average adult suffers from two to four colds a year, while the average child can experience up to ten infections per year, causing a substantial economic and public health burden.

There are three species of HRV – species A, B, and C. Because these encompass about 170 different strains with relatively little cross-protective immunity between them, a preventative vaccine for HRV has historically been viewed as virtually impossible to achieve. An effective vaccine would have to be multivalent, meaning that it would have to contain antigens for many different strains. The number of antigenic strains that a vaccine can contain is limited by the volume of fluid that can be injected into a patient (typically 0.5 ml for an adult) and the concentration of antigens that can fit into that volume. Many vaccines also contain an adjuvant, an agent that enhances and/or prolongs the immune response to an antigen. Adding an adjuvant to a vaccine further limits the number of antigens an injectable volume can hold.

Because of these limitations, multivalent vaccines are usually trivalent or quadrivalent at most, containing antigens for three or four strains. However, recent progress in technology has allowed for production of vaccines with higher valencies. For example, Merck’s human papillomavirus vaccine, Gardasil 9, protects against nine different viral strains, while the pneumococcal vaccine, Pneumovax 23, protects against 23 different bacterial strains.

These advances in multivalent vaccine science have inspired renewed efforts towards production of a rhinovirus vaccine. A group at Emory University recently showed that intramuscular administration of multivalent HRV vaccines that contain a sufficiently high concentration of formalin-inactivated HRVs can induce neutralizing (i.e., virus-inactivating) antibodies to most, if not all injected antigens.

To be able to increase the number and concentrations of antigens in one injectable dose, the authors next used rhesus macaques as an animal model, where a larger inoculum volume could be used. Immunizing two animals with a first dose of a 25-valent vaccine induced neutralizing antibodies against 24 out of 25 strains in one animal and against all 25 strains in the second animal. A booster dose of this vaccine produced neutralizing antibodies against all 25 strains in both animals. A first dose of a 50-valent vaccine in two additional animals induced neutralizing antibodies towards 41 and 45 of the input strains in the two animals respectively, while a booster dose increased this number to 49 out of 50 strains for both animals. The authors speculate that the greater breadth of response observed in macaques compared to mice following a first dose may be because of animal species differences or because macaques can receive higher input concentrations due to their size, enabling a larger inoculum volume.

The study had a few limitations. First, none of the formulations included HRV C antigens, which are particularly important for pediatric populations. Second, although the authors mention that the booster dose of the 10-valent vaccine caused serum antibodies to persist in mice for 230 days after the boost, they offer no additional information about whether these antibodies persisted beyond this time and whether antibodies produced from any of the other vaccines showed the same level of persistence. Third, the antibody responses were type-specific and not cross-neutralizing, meaning that an antibody produced in response to one antigenic strain only recognized that specific strain. Nevertheless, other studies suggest that even in the absence of cross-reactive antibodies, cross-reactive CD8 T cells can promote clearance of virus. Fourth, intramuscular administration of inactivated HRV only induces serum antibodies and does not usually induce mucosal immune responses, which are important as a first line of defense in protecting the upper respiratory tract against HRV infection.

Furthermore, because mice and rhesus macaques don’t have a cell surface receptor that binds HRV, the authors were unable to perform challenge studies, meaning that they could not infect the immunized animals with live virus to see whether vaccination was effective in preventing disease. Also, animal models are often not fully predictive of outcomes in humans, a phenomenon humorously described by Marc Girard and Stanley Plotkin as “mice lie and monkeys exaggerate.” Therefore, the true efficacy of any vaccine in humans can only be measured by doing human challenge studies.

In spite of its constraints, this study suggests that it is possible to produce a broadly neutralizing vaccine against many different types of HRV by using a simple vaccine approach. The authors hope to produce an adjuvant-containing 83-valent HRV A formulation that can be administered in a 0.5 ml dose. Hopefully, this will bring us one step closer to preventing the common cold.

Next post: Trial By Error: Fiona Godlee Doubles Down on Lightning Process Study