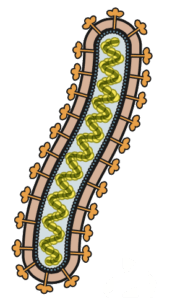 The Democratic Republic of the Congo (DRC) is currently experiencing its worst outbreak of Ebola virus disease in history. More than 3,000 people have been infected with the virus, and nearly 1,900 have died since the outbreak began in 2018.

The causative virus is “Ebola virus”, the strain previously known as Zaire ebolavirus. It is the most lethal of the six known strains, with a rate of mortality approaching 90%. Although many people think that one can become infected by inhaling contaminated aerosol droplets, the virus actually requires direct contact with bodily fluids to reach its next host. Unfortunately this happens easily in the DRC where family members usually care for their own sick with apparently little regard for proper personal safety and containment practices.

The current outbreak prevails despite the existence of rVSV-EBOV, a very effective vaccine manufactured and distributed by NewLink Genetics and Merck. rVSV-EBOV is a recombinant vesicular stomatitis virus that was genetically engineered to express an Ebola virus glycoprotein, which elicits an immune response that inactivates this Ebola strain. The vaccine is administered proactively to contacts and contacts of contacts of an infected person, a strategy termed ring vaccination. Although rVSV-EBOV has an efficacy of about 97% if administered prior to infection, its benefits are unclear if administered after exposure to the virus. Therefore, there is a long-standing need for an effective therapeutic drug for treating Ebola virus infection.

Until recently, treatment of Ebola virus disease consisted primarily of supportive care in combination with various experimental drugs. One such experimental drug is ZMapp, which consists of three monoclonal antibodies. Monoclonal antibodies are specific to a single epitope (a portion of an antigen) and are produced by one clone of antibody-producing cells. Unfortunately, ZMapp has limited efficacy.

In general, antibodies can be neutralizing or non-neutralizing, a definition based on assays carried out in cells in culture. As discussed in a previous post, neutralizing antibodies block viral infection in various ways. They may prevent binding of a virus to the cell receptor, block entry of the virus into a cell once it is already bound, or prevent uncoating of the viral capsid once it is inside the cell. Neutralizing antibodies may also cause virions to aggregate, thereby reducing or diminishing their infectivity. Many antibodies that do not have neutralizing activity in in vitro neutralization assays can nevertheless protect experimentally inoculated animals from infection. Such non-neutralizing antibodies can attack viruses by engaging other arms of the immune system to carry out immune effector functions. For example, antibodies can activate the complement system to recruit phagocytes that engulf the viral particle. Antibodies can also induce antibody-dependent cell-mediated cytotoxicity, a mechanism by which certain immune effector cells such as natural killer cells lyse a pathogen-infected cell that is bound by antibodies.

mAB-114 consists of a single monoclonal antibody that was isolated from memory B cells of a human survivor of the 1995 Ebola virus outbreak in the DRC. This survivor still had antibodies against the virus eleven years after infection. mAB-114 binds both the full length surface glycoprotein (GP1,2) of Ebola virus and its soluble form sGP, which is secreted from infected cells. This antibody has strong neutralizing activity against both of these antigens, but can also result in cell killing by antibody-dependent cell-mediated cytotoxicity.

REGN-EB3 is a cocktail of three monoclonal antibodies, which all have different properties. One antibody is both neutralizing and induces antibody-dependent phagocytosis or antibody-dependent cell-mediated cytotoxicity, but does not bind sGP. The second is non-neutralizing but binds sGP and elicits other immune effector functions. The third antibody is neutralizing but does not bind sGP and elicits no immune effector functions.

Both mAB-114 and REGN-EB3 are highly effective. Treatment of individuals with either drug shortly after infection results in a survival rate of about 90%.

Despite this good news, public health reporter Helen Branswell warns that even the combination of the existing vaccine and the two new drugs may not be enough to defeat the present outbreak in the DRC or to prevent future outbreaks. Progress in disease control in the DRC is usually hindered by a number of factors. Health workers are often unable to move around freely due to military conflict and gang violence. Additionally, locals and government officials often spread rumors that Ebola virus does not exist and that health workers lure locals to the clinics to steal their blood and body parts for witchcraft practices. Ebola virus disease is also often described as a behavioral disease because in spite of being warned not to, family members inherently insist on caring for their sick and follow burial rituals that require close contact with the body. Health officials hope that once a certain number of locals are cured of their infection with the help of the newly available drugs, these individuals will help build trust, suppress the spread of misinformation, and encourage more victims to seek help sooner.