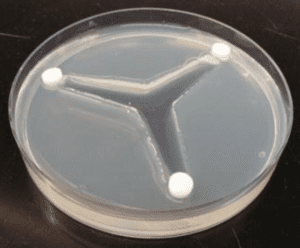 Viruses have no intrinsic means of locomotion, but because of their small size their movement can be driven by Brownian motion. Propagation of viruses is dependent on essentially random encounters with potential hosts and host cells. An exception appears to be chloroviruses, which can attract their host from a distance.

Chloroviruses are large icosahedral viruses with a double-stranded DNA genome of 290-370 kb. They replicate in eukaryotic green algae which live inside the protozoan Paramecium bursaria. The chloroviruses attach to the surface of the protozoan but cannot enter to infect the endosymbiont. When the protozoan is ingested by a copepod predator, it is disrupted and algae and virus are released in the fecal pellet. Chloroviruses can then infect the released algae (as discussed in TWiV 416).

It seems that the chloroviruses are able to attract the P. bursaria host. This conclusion was made by examining P. bursaria movement in Petri dishes containing agar with a three-way chamber in the center (pictured). Paramecia placed in the center of the mold can move into any of the three â€˜armsâ€™. Repeatedly the protozoans were observed to migrate towards either chlorovirus or virus-infected cells. Such chemotaxis was not specific to the type of chlorovirus and was dependent on the virus concentration.

When virus particles were separated from the aqueous phase by centrifugation, the latter preferentially attracted P. bursaria. This observation indicates that virus particles shed a soluble factor that is a chemoattractant. The soluble factor could be a viral protein or one of many small molecules found in the capsids.

This report is the first to document the ability of a virus component to attract a host cell, and of course many questions arise. One is whether the attraction plays any role in viral reproduction. To answer this question it will be necessary to identify the soluble attractant so that it can be removed from the virus particles and the effect on virus reproduction in the host determined. If we can learn how the Paramecium senses the viral attractant, this property can be interfered with and again, the effect on virus reproduction determined.

I wonder whether other viruses can â€˜attractâ€™ host cells. Such host cells would have to be motile, as are many bacteria and eukaryotes, as well as cells within multicellular organisms such as macrophages and dendritic cells,.