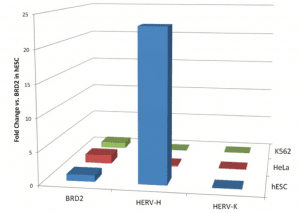 About eight percent of human DNA is viral – remnants of ancestral infections with retroviruses. These endogenous retroviral sequences do not produce infectious viruses, and most are considered to be junk DNA. But some of them provide important functions. The protein called syncytin, which is essential for formation of the placenta, originally came to the genome of our ancestors, and those of other mammals, via a retrovirus infection. Another amazing role of endogenous retroviruses is that they regulate the stem cells that are the precursors of all the cells in our body.

The genetic material of retroviruses is RNA, but during infection it is converted to DNA which then integrates into the chromosome of the cell. Â If the infected cell happens to be a germ cell, then the viral DNA, now called called an endogenous retrovirus,Â becomes a permanent part of the animal and its offspring. One of our endogenous retroviruses, called HERV-H, infected human ancestors about 25 million years ago. HERV-H has been found to be important for the properties of human embryonic stem cells.

Embryonic stem cells (ES cells), which are derived from the inner cell mass of a blastocyst (which forms 4-5 days after implantation), are pluripotent – they can differentiate into every cell type in the human body. Being pluripotent means expressing a very different set of genes compared with somatic cells – the cells of skin, muscle, organs, to name a few. The genes that are expressed in ES cells are controlled by a small number of key proteins that regulate mRNA synthesis. If these proteins – just four – are produced in a differentiated cell, it will turn into an ES cell – an induced, pluripotent embryonic stem cell, or iPSC. This observation garnered Shinya Yamanaka the Nobel Prize in 2012.

The first clue that HERV-H might be important for the pluripotency of ES cells was the finding that this DNA is preferentially expressed in human ES cells (the figure [credit] shows the expression of HERV-H in ES and two other cell types). When the levels of HERV-H RNAs are reduced (by RNA interference) in ES cells, the morphology of the cells changes – they become fibroblast-like, a sign of differentiation. In contrast, when fibroblasts are reprogrammed to become iPSCs, the levels of HERV-H RNAs rise. These findings suggest that HERV-H is essential for keeping ES cells pluripotent, and for making somatic cells pluripotent.

The HERV-H RNA made in human ES cells is not translated into protein because it contains many mutations that have accumulated over the past 25 million years. Therefore HERV-H is a long, non-coding RNA (lncRNA), a relatively recently discovered class of regulatory RNAs. There are about 35,000 lncRNAs in human cells that are involved in controlling a variety of processes such asÂ splicing, translation and epigenetic modifications. Now we know that endogenous retroviruses can also produce lncRNAs.

Without endogenous retroviruses, humans might not be recognizable as the Homo sapiensÂ that today walk the Earth. They might alsoÂ be egg-layers – but the eggs would be white.Â Viruses don’t just make us sick.