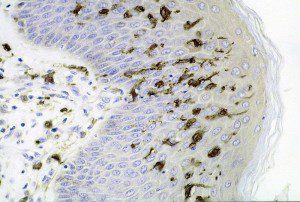 The risk of being infected with human immunodeficiency virus type 1 (HIV-1) is substantially enhanced in individuals with other sexually transmitted diseases. For example, infection with herpes simplex virus type 2 (HSV-2) increases the risk ratio of acquiring HIV from 2 to 4. Explanations for this increased risk include direct inoculation of HIV-1 into the blood through genital ulcers, and the induction of inflammatory cells by HSV-2 which act as sites of replication for HIV-1. The results of infections carried out in cell culture suggest a biological mechanism for the enhancement of HIV-1 infection by HSV-2.

Langerhans cells (LC) are believed to one of the first cells in which HIV-1 replicates after sexual exposure. LCs are dendritic cells which patrol the mucosal epithelium, taking up and processing antigens and presenting them to T cells in the lymph nodes. These cells express the HIV-1 receptors CD4 and CCR5, but not CXCR4, and can therefore be infected with CCR5-tropic* but not CXCR4-tropic HIV-1. Individuals who do not express CCR5 are resistant to HIV infection. For these and other reasons CCR5-tropic HIV-1 viruses are believed to be ones that transmit infection from one individual to another.

In human skin explant cultures, which contain LCs, co-infection with HSV-2 substantially increased the number of HIV-1 cells. This observation could not be explained by co-infection of individual cells because very few of these were observed in the cultures. When applied to fresh cells, the supernatant of cultures infected with HSV-2 also stimulated the number of HIV-1 infected LCs. These observations suggested that HSV-2 infection stimulates the production of one or more substances from infected cells which in turn improve HIV-1 infection.

Human epithelial and epidermal cells are known to produce antimicrobial peptides such as defensins and cathelicidin. These are short, evolutionarily conserved peptides that inhibit the growth of bacteria, viruses, and fungi. HSV-2 infected keratinocytes were found to produce a number of antimicrobial peptides, but the most important one is called LL-37. This peptide enhanced the expression of HIV-1 receptors CD4 and CCR5 on LCs, leading to increased susceptibility of the cells to HIV-1. Removing LL-37 from the supernatant of HSV-2 infected cells reduces the ability of the medium to stimulate susceptibility to HIV-1.

These findings provide a plausible mechanism by which HIV-1 infection is enhanced by HSV-2. When HSV-2 infects the genital mucosa, the epithelial cells produce LL-37. This antimicrobial peptide enhances the production of CD4 and CCR5 on LCs, allowing more efficient infection by HIV-1. This mechanism is supported by the observation that elevated levels of LL-37 correlate with HIV-1 infection in sex workers.

I wonder why antimicrobial peptides up-regulate CD4 and CCR5. In addition to their antimicrobial properties, the cathelicidins possess chemotactic, immunostimulatory, and immunomodulatory effects, and the upregulation of CD4 and CCR5 are likely part of these activities.

These are exciting findings, and if they are further correlated in humans, they might lead to novel ways of interfering with HIV-1 infection, such as by antagonizing LL-37.

*CCR5 and CXCR4-tropic refer to HIV-1 virions that bind to chemokine receptors CCR5 or CXCR4, respectively, in addition to CD4, to initiate infection.