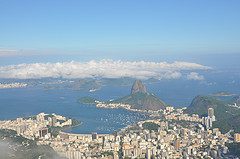 Readers of virology blog have no doubt seen news reports that a Brazilian influenza isolate called A/Sao Paulo/1454/2009 (H1N1) is novel strain with mutations that enable it to infect new hosts. Here is one example of such a report, from The Australian:

Brazilian scientists have identified a new strain of the H1N1 virus after examining samples from a patient in Sao Paulo, a research institute says. The variant has been called A/Sao Paulo/1454/H1N1 by the Adolfo Lutz Bacteriological Institute, which compared it with samples of the A(H1N1) swine flu from California. The genetic sequence of the new sub-type of the H1N1 virus was isolated by a virology team led by one of its researchers, Terezinha Maria de Paiva. The mutation was comprised of alterations in the Hemagglutinin protein which allows the virus to infect new hosts, it said.

There is nothing novel about this Brazilian isolate. Comparison of the amino acid sequence of the HA protein of A/Sao Paulo/1454/H1N1 with those of other isolates of the current pandemic strain reveals no alterations in the HA protein which would allow the virus to infect new hosts. The HA protein of this virus and many other 2009 H1N1 isolates are identical. The few amino acid differences with other 2009 H1N1 isolates are in areas that would not be expected to influence antigenicity or host range.

I’ll give the journalists the benefit of doubt: perhaps they misinterpreted the statements of the Brazilian scientist. But they should have confirmed their story with a virologist. They would have learned within a few minutes that there is nothing novel about A/Sao Paulo/1454/2009 (H1N1).