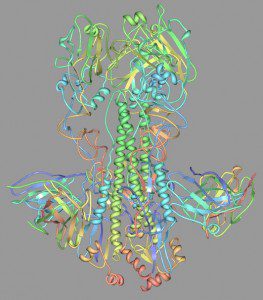 The best way to prevent influenza is by immunization. Unlike vaccines for polio and measles, which confer life-long immunity, the influenza vaccine protects for only one year. Influenza virus undergoes antigenic variation, necessitating annual production of a new vaccine. Is it possible toÂ formulateÂ an influenza vaccine that protects against all virus strains for life?

Such broadly-reacting neutralizing monoclonal antibodies have been reported previously, but they are rare. When animals are immunized with influenza virus, most of the antibodies that are produced are directed against the membrane-distal, globular head of the HA molecule (top of image).Â Resolution of the X-ray structure of one of the monclonal antibodies bound the the H5 HA protein revealed that the antibody binding site is a hydrophobic pocket on the stem of the HA molecule. This membrane-proximal site Â is probably not readily recognized by B cell receptors and therefore rarely gives rise to antibodies. The authors circumvented this problem by selecting antibodies using a soluble form of the HA protein, which is not subject to such steric constraints.

A number of significant hurdles remain to be overcome before these findings translate into an influenza vaccine. As noted above, another epitope must still be identified that elicits neutralizing antibodies against viruses of the 6 other HA types. Additional screening of human antibodies with soluble HA protein will presumably address this issue. A more difficult is how to formulate a vaccine with these epitopes. The most effective influenza vaccines are whole or split virus preparations, but how can these be prepared so that the membrane-proximal HA epitope is immunodominant? If the globular head of the HA is removed, the virus will not be infectious and cannot be propagated for vaccine production. One solution might be to produce defective particles in producer cell lines. The problem is not insurmountable, but will require some new and innovative approaches in influenza vaccine development.

These are very exciting findings, and in my opinion, bode well for a universal influenza vaccine within the next decade.