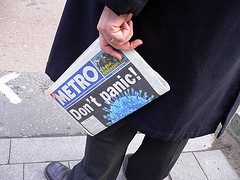 Yesterday the New York Times ran an article on the resistance to Tamiflu of current influenza H1N1 strains circulating in the US. I wrote a post about this issue on 22 December 2008, so I’m happy to see the Times following my lead. But there is an issue with the Times article that I’d like to address here. According to the article:

Nevertheless, our anti-influenza drug arsenal is much too small. It’s worth recalling the following information from Principles of Virology (ASM Press):

Influenza virus shares similar features as HIV-1: high replication rates in many hosts, and the generation of large numbers of viral mutants. Therefore any antiviral strategy that employs only three drugs  is bound to fail. The difference with influenza, of course, is that an excellent vaccine is available, and should be used whenever possible. The antiviral compounds should only be used in the face of an outbreak when immunization has not been sufficiently comprehensive. However, I suspect that the use of Tamiflu and Relenza is far more prevalent than desired. How many people rush for a prescription at the first signs of a respiratory infection? And how many of those have already been immunized? This was not the intended use for these antiviral compounds.